The Second World War was a time of a sea change in amphibious operations, Accounts of Gallipoli, the Zeebrugge raid and other First World War operations all record the difficulties of disembarking troops swiftly in the face of opposition. For the historically minded The Riddle Of The Sands describes the level of adapted vessels that could be achieved. Fast forward to 1939 and there was still a shortage of suitable craft. the difficulty being well demonstrated by landings at Narvik. 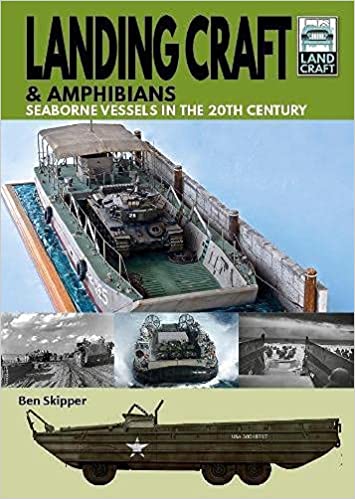 The German plans for Operation Sealion revolved around river barges and pontoons, the latter being seen as potential gun platforms. With the island-hopping campaign planned in the Pacific it was inevitable that the USA would be a driving force in amphibious warfare technology. The section on American equipment is comprehensive, German equipment also gets coverage with the well-known Schwimmwagen , but also the Rheinmetall-Borsig Landwasserschlepper (really!). There is also a brief look at Soviet era amphibious vehicles and also air cushion vehicles. Old BAOR hands will see a reference to Stalwart.

A certain generation of readers will have grown up with “The Longest Day , The Sands of Iwo Jima and more recently Saving Private Ryan . However, the landing craft and DUKWs have little said about them. This book is an excellent, compact overview of the craft and vehicles. The pictures are first rate and there is a reasonable amount of information. There are more detailed military books and ditto naval but this book neatly combines the two.

The book is probably of the greatest utility to model makers or painters who are well served. It is probably a bit narrow focus for the generalist reader, The lack of an index is a nuisance if using it as a reference aide memoire

The standard of printing is high with good glossy illustrations and the book retails at £16.99 but there are copies from £12.91 on Amazon. Ben Skipper the author is himself a modeller and has produced two other books to date. Hopefully, there will be follow ons.