Another title in the expanding 'Images of War' series, this title provides a fascinating insight into the RAF over the period immediately prior to the outbreak of WW2 in September 1939. The author, Martin Derry, is an aviation enthusiast with a number of previous titles to his name and he writes with an engaging and fluid style that mixes the technical aspects of the subject with the human element, often including detail of the fate of the aircraft in the picture. As an example, although a tactical failure the Boulton Paul Defiant remains one of my favourite wartime aircraft and there are some excellent pictures here however the human cost is brought home when the final sentence in a caption is that 'N1535 was last seen chasing a Ju88 when it is believed to have been shot down by a Bf 109 off Dover on 24 Aug 40, killing both crew'. I think it's an excellent touch. 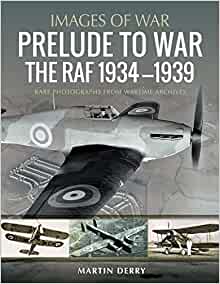 The book is logically laid out with a clear introduction followed by chapters on fighters, bombers, maritime patrol, army co-operation and future designs. Sensibly the really well known aircraft of the period such as the Spitfire, Hurricane and Wellington are given only a page or two - the remaining space being devoted the the utterly bewildering array of platforms fielded by the RAF over this period of immense technological advancement in aviation and aeronautics. Here are the turret fighters such as the Roc, Defiant and Hotspur, the nimble natural metal biplane fighters such as the Demon, Fury and Siskin along with the more bullish Gamecocks, Gauntlets, Bulldogs and Gladiators. It's amazing to think that the RAF still operated all wood biplane bombers in the early '30s (the HP Hyderabad, top speed a blistering 109mph) and within a year or two was seeing relatively fast monoplane bombers such as the Battle and Blenheim coming into service, the latter being faster than all the then in service fighters. Of course the pace of change was such that often these types were obsolete as soon as they entered service but if there is one thing this book shows it's that the RAF was not a force jam-packed with monoplane fighters and bombers on the eve of war - far from it. Away from the glamour boys there are amazing photos of the frankly rather wacky flying boat designs of the likes of Saunders Roe and Short Bros, culminating in the Sunderland. As for Army Co-operation, who knew that Hawker Hectors, biplanes based on the older Hawker Hart/Audax/Hardy were both bombing German artillery around Calais and dropping supplies to surrounded Tommies in May 1940? I certainly didn't, I hadn't even heard of the type before.

Overall, this is an excellent book that is both useful as an historical reference and also of interest to the casual reader - it's well put together and the photographs are well chosen and described, if you want to learn the difference between a Saro London and a Blackburn Botha then look no further. My only negative comment is that it ends very abruptly with no summary or appendices.