Set out in the usual Images of War format of archive BW photographs accompanied by descriptions and contextual information, Hitler's Panther Tank Battalions 1943 - 1945 is written by an experienced military historian with a number of German WW2-specific titles to his name. The structure is commendably simple with four chapters covering the Panther's combat history in Russia and Italy followed by Normandy and the final battles in both West and East. These chapters are preceded by an Introduction that is accurate and concise including some good photographs of the Panther in its development phase and bookended by appendices on specification, variants and the composition of a panzer recce battalion (which I found a little unnecessary but useful for wargamers perhaps). 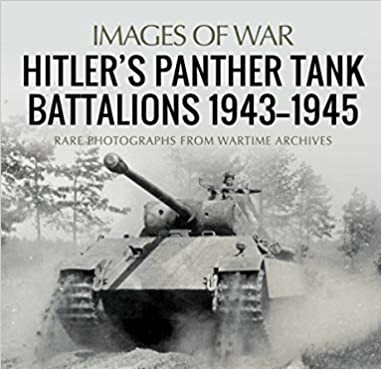 On to the photographs. Overall they are a good mix of detail and rarity and throughout I was struck by how relatively large the Panther was. From an aesthetic perspective it certainly met the 'if it looks good it probably is good' although it's teething troubles and difficult debut at Kursk in 1943 are well documented here. In the Russian chapters there are number of photographs showing the rail movement capability so critical to strategic and operational level movement in the East and the specialist maintenance companies that always had their hands full. Panthers in Normandy are inevitably well camouflaged against marauding Allied 'Jabos' and many of the photos taken in the East show the bitter climatic conditions faced by those who served there. Both of these factors mean that some detail is obscured, unsurprisingly as taking high quality photographs on the front line would have been challenging. There are however some very clear and detailed shots but they are in the minority, with the overall aim being to give a good feel for what many believe to have been the best tank design of WW2. As ever, sometimes it is what's in the periphery of a photograph that is the most interesting - one taken in Italy also shows an Elefant that has been pushed into a ditch while another rather bizarrely shows a Panther being overtaken by a truck load of morose looking horses (proof of the Wehrmacht's continued dependence on them).

As a resource I think it adds little to the historical canon (which is already huge) but for modellers or casual readers wanting to see the vehicle in context it's pretty good. There are a few typos and 'odd' historical views but nothing too irritating so an overall 3/5 mushroom heads.