Images of War: Dunkirk and the Aftermath

Stephen Wynn's "Dunkirk and the Aftermath" is a new entry into Pen and Sword's 'Images of War' series showcasing 'rare photographs from wartime archives'. A 173 page medium-sized softback, it is presented in seven chapters plus a short introduction describing the opening course of the war, and at the end an author biography. The short but informative chapters cover the Halt Order, Admiral Ramsay and Operation Dynamo and its immediate aftermath, the Le Paradis and Wormhoudt massacres (including provisional lists of the victims drawn from Commonwealth War Graves Commission records), Lost equipment, Dunkirk and the British Government (with an extract of relevant questions asked in Parliament), Dunkirk and the British Press, and finally Operations Cycle and Arial, the subsequent evacuations from Le Havre (Cycle) and various other locations including St Nazaire (cf. the Lancastria tragedy) and Nantes. In each case the text is followed by relevant photographs reproduced to a good size, in black and white (but see below). 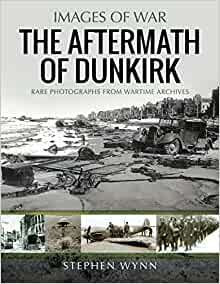 Looking at the text, there are a few mistakes, e.g. 'corroborate' for 'collaborate', 'Adolph' for 'Adolf', 'in tact' for 'intact', and 'Harve' for 'Havre'. Likewise some of the higher-level historical analysis is open for debate - for example I think the author overestimates the ease of a putative German invasion of the United Kingdom and overstates when he describes Hitler's 'Halt Order' as "quite possibly the worst and costliest decision made by any leader...during the entire war", given that he mentions Operation Barbarossa in the same paragraph. These quibbles aside, however, the text overall is clear, readable and coherent, if quite conversational in places (as are the captions), and a pleasant read as the author's enthusiasm for his subject comes across.

I do have reservations about the photographs, however. Whilst many are undoubtedly accurate to the place and period, there are some (too many) which are not. Without any attribution it is difficult to check but given that this book is about photographs from Dunkirk and environs in 1940, the inclusion (p.40 refers) of a photograph of what is clearly a Churchill Tank (which did not enter into service until 1941), and which a simple image search tells us is a photograph of the aftermath of the 1942 Dieppe Raid, is a significant error. It is flanked on the facing p.41 with a picture of a Jagdpanzer 38(t) Hetzer tank destroyer (incorrectly captioned as a 'tank'); a vehicle which did not come into production until 1944. Slightly more debatably, a photograph on p.35 captioned 'German soldiers involved in the fighting against Allied rear guard units at Dunkirk' is accessible on the internet attributed to the Associated Press and described (more accurately in my view) as 'The crew of a German anti-tank gun, ready for action at the Russian front in late 1942.' Similarly, a photograph on p.54 captioned 'A British vehicle passes a destroyed armoured vehicle on its way to Dunkirk' is identified on the internet with the (again, in my view, more persuasive) identification "half truck [sic] of the US 26th Infantry Division drives past knocked out German tank destroyer Hetzer...18 MAR 45." I suspect that ther are other examples but I am no German equipment or uniform expert so have picked only the ones which seemed fairly obvious to me. All of this does reduce confidence that the other photographs are what they say they are.

It is a great pity as the book is clearly well-intended but without a general confidence that the pictures are what they purport to be, this illustrated book loses much of its worth as a record, and so I can only give it two stars. Nonetheless it has the potential to be a worthwhile addition to the bookshelves and I hope that Pen and Sword will consider a second edition with the illustrations checked and any errors corrected.

Amazon.co.uk : images of war dunkirk and the aftermath of dunkirk