Bottom line up front: there are almost certainly some real academic military gold nuggets in here, but they are difficult to find.

Pires is a senior officer in the Portuguese Army and holds a PhD in History, Defence and International Relations. The fact that Petraeus wrote the foreword, and Pires' examining panel for his PhD included the Chief of the Army and a former Minister of Defence, points to the fact that Pires has the right academic and military credentials to be able to proffer a well-thought through opinion.

The book is a development of his doctoral thesis. Although he has tried to simplify the academic content, as with many other books of similar lineage, this is evidence yet again that trying to dilute dense academic text for the lay reader is fraught with danger. Just to double down on this, the book is clearly a translation from the original Portuguese and that translation is often rather too literal, leading to stilted phrasing and some relatively incomprehensible sentences. 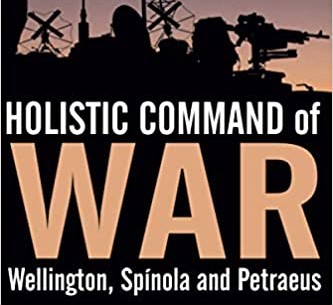 As I said at the top, this isn't to say that the concepts that Pires introduces aren't perfectly valid; it's just that it takes real effort to cut through the dense forest of words to get to the nub. His basic premise is that complex security challenges require holistic solutions, involving both military and civilian agencies. He uses Wellington, Spinola and Petraeus's experiences to back up his argument. This interesting spread, across different circumstances and ages, certainly added to the book: I actually would have liked a little more detail on the military historical fact, although this (omission) is a deliberate policy by Pires to not distract from his argument and he does include a little more biographical detail in the appendices. Spinola in particular (a Portuguese General who briefly became President of Portugal, through a coup, in 1975) was really interesting, as someone I had not been previously exposed to. If this had been written by a British author, I suspect Spinola would have been replaced by Templer in Malaya.

All in all, I think this book will be a welcome addition to the genre and will take its rightful place on the shelves of the Hobson Library at JSCSC where it will be referenced in many a Defence Research Paper. I suspect its interest and utility to the more generalist reader is rather more limited... Available on Kindle for £9.99 and in paperback for £24.95 from Amazon.