Right, you savages. We're trying to bring ourselves in to 2017, so we're ditching the written reviews for the most part, and moving to what's called a 'talkie' where you can see and hear the review. Amazing stuff eh? 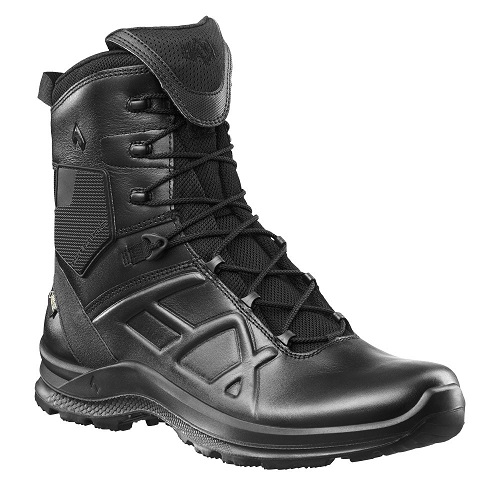 I don't give a crap if you can't stand my voice either.

Competition: It's detailed at the end of the video, but if you can't be bothered watching, simply stick your answer in the comments box below. We want to know what the worst pair of boots you've ever worn were, and why! The winner will get a pair of the Haix Black Eagle Tactical 2.0 GTX! Woo!

We're also not entirely sure how the video reviews are working for some people, so in the meantime, here's the written review:

Review:
Trends come and go, styles come and go. Organisations change their core requirements and the relevant industry has to change and adapt if they want to survive. The British defence establishment may have ditched black boots for brown boots, but black tactical footwear is here to stay. Whilst a tear was shed at many a boot manufacturer when they realised half their line was redundant, it gave the consumer a bit of breathing space as many whittled down their lines and ranges to core models that performed and sold well.

The old problem of too much choice being a bad thing has started to balance out now. There’s more focus now on quality, functionality and style rather than just cobbling (cobble.. boot…. Honestly, why aren’t I getting paid for this comedy gold?!) together any old mish-mash of a boot.

Haix faced the same challenge as the rest, but they’ve advanced their tactical range to the new Black Eagle Tactical 2.0 GTX, incorporating both full GORE-TEX, ankle protection and a generally light, comfortable boot.

Made from full grain (or Grade 1) leather, the Black Eagle is designed first and foremost with quality in mind. There are some boot manufacturers who will opt for top grain or corrected leather which means the leather has been artificially adjusted (buffed down, chemically treated, etc) to remove blemishes. Depending what you read, they may try to sell this is a good thing, but ultimately, it’s a bad thing. It’s sort of like ‘triple distilled whiskey’ – that’s not a good thing, it’s the same as using a teabag three times! Full grain leather gives the best yield and durability and is simply put, the best leather available from an animal hide.

The Black Eagle is a full 3-ply GORE-TEX rig, including the tongue itself. This means in theory, you should be bone dry unless the water comes in over the top of your boots, in which case, let’s be honest, you’re having a crap day and it’s probably time to pack it in and go home. Considering that it’s full GORE-TEX, the Black Eagle is still very light and flexible with none of the heaviness you’d associate with a GTX boot, weighing in at only 600 grams. This means you can skip, hop and bounce through puddles all day long without your feet taking on that heavy, leaden feel.

An added bonus is that as always, GORE-TEX is breathable, meaning you get to avoid the Catch-22 of having no water get in, but no moisture getting out, leading to damp, sweaty feet. Being objective, it’s never going to completely work. Your feet are in a confined, limited area. No matter how breathable the material may be, your feet are going to sweat. The only question is how much?

With the Black Eagle, after a full day in the boots in dry conditions, my socks had signs of damp around the toes and small damp spotting over the bridge of the foot. Far from the worst I’ve ever experienced in a GTX boot, and probably worse because I wore very thin socks just for that purpose. I felt that the amount of moisture retained was a more than acceptable trade-off for the water resistance available. I normally wouldn’t even consider a GTX boot for an every-day wear, but actually, the Eagle is no worse than many boots that don’t have any waterproofing.

For when the weather or conditions are against you, the Black Eagle meets expectations. The water hazards that were encountered were defeated with the inners staying dry throughout, both with partial submersion and general exposure to heavy rain. As I mentioned in another article, this is summer in Scotland and we’ve had plenty of torrential storms to play in!

With an outsole is marked as ‘Double Density’, you also get that extra abrasion resistance and greater levels of comfort underfoot. Another benefit of the double density construction is that you can get away with having a thinner insole. This cuts down on heat retention and can give a more comfortable fit to the boot.

The insole provided is the stock Haix insole. It’s been mentioned elsewhere that they’re nothing special to write home about, but they’ll do the job and should you swap them out for something more high-end, then you’re not throwing away a large amount of the overall expenditure on the boot with it. It’s worth bearing in mind however that the double density sole is designed to allow a thinner insole to be used – the outer sole itself is where the shock absorption and cushioning comes from.

The sole of the boot is also resistant to heat, cold, petrol and oil, with a self-cleaning grip setup that should keep most of the debris and crap out, maintaining your control over any terrain.

On the outside, the Haix Black Eagle has a gimmicky side panel marked ‘ankle protection’ that is made of rubber and is designed to absorb any impact to the ankle bone area. I refer to it as a gimmick because that was my initial thought. If you want to see if it works, check the video. It does, it’s not a gimmick!

The lacing system comprises of the Haix 2 Zone system. There’s a loop through system that locks the bottom half of the laces in place, meaning they should never slacken off, allowing you the top half of the laces to adjust to get your feet in / out etc. It works well and saves a bit of phaff and hassle.

Overall, it’s a really very well designed boot, and I’m amazed they’ve managed to keep it so light with a full GTX fitting. With the insole it comes in a 632g, and comparable boots such as the Alt-berg Aqua is around 200g heavier.

I’d definitely consider the Black Eagle Tactical 2.0 GTX for my standard wear boot, I’m happy with how it’s performed and the comfort it’s brought. The downsides are the sole isn’t pierce resistant and the toecap only provides minimal protection from impact, but these are minor points which you can balance off with a review of your risks and needs in a tactical boot.

At £144.90 from Haix direct, they’re close to the top end for a tactical boot, but I think it’s merited and shows itself in the quality of build.

You can buy them HERE and don’t forget to watch the video for the competition!

Well, 12 months on and there's good and bad news with them. The uppers and inners are in great shape, even the laces. The soles, however, have had it, they've just started to leak where they've worn out. Apparently, this is unusual for Haix, according to Mr. Bane. This leads me to one of two conclusions either he's a lazy sod who contrary to his claims, spends a lot of time with his feet on a desk and is a stranger to hard work. Or he had a quiet word with Haix in a fit of pique over my well deserved winnings and had them send me a pair of seconds and kept the pukka ones for himself!
Upvote 0 Downvote
Read more...
Menu
Log in
Register
Install the app
Top