First Tactical have appeared on ARRSE a few times now, and each time the kit has shown itself to be exactly what you need in terms of reliability and durability. As such, it’s no surprise that the First Tactical V2 trousers meet the same high standards as set before with the First Tactical Defender trousers. 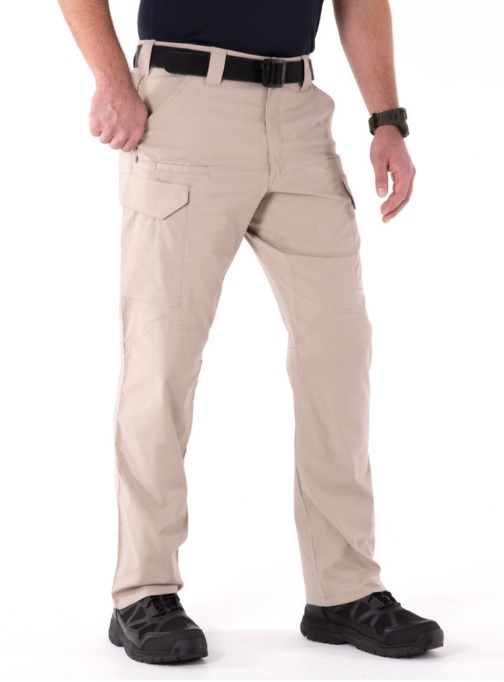 Designed with First Tactical’s own ARMS fabric technology, the trousers are 65% polyester and 35% cotton mix with micro ripstop and a Teflon treatment for a stain repellent stitching. The material is also designed to give a two-way mechanical stretch which means the trousers flex and give as you move, ensuring you’ve got full range of movement without any hindrance.

The flex itself is actually very noticeable if you just grab and pull at two parts of the trouser – the whole area around it will stretch both ways with minimal resistance and you know that whatever the obstacles ahead, you’ll tackle them without constraint.

Throughout the trouser the overall integrity is maintained by double and triple stitching around key areas although, and I noticed the exact same on the Defender, there’s a line of stitching at the front of the knees which always seems to come away from the fabric. I’m not sure if that’s a design issue or some particularly weird way I’m wearing or using the trousers, but it’s never been an issue as it doesn’t spread any further down the stitching. 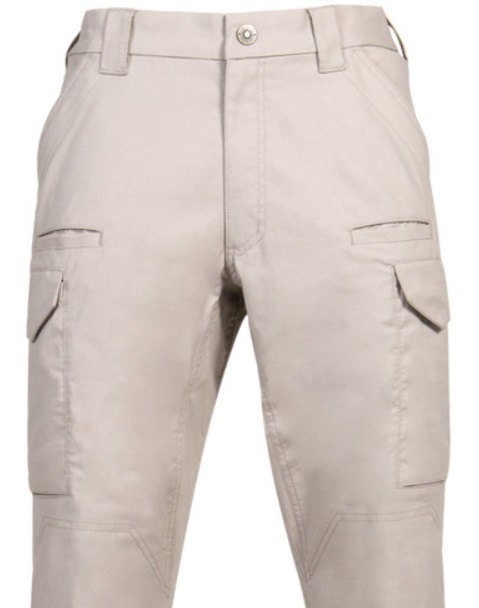 The fabric is also dyed at the fibre stage then dyed again once the fibre is woven into fabric. This gives a longer wear to the colour and resolves an issue first identified in the Defender initial run where the black started to fade out after several washes. This shows testament to the philosophy at First Tactical and of Dan Costa, previously of 5.11 Tactical, in that quality matters and problems are there to be solved, not avoided.

The Defender weighs in at 181 grams compared to the 195 grams of the Defender. Whilst again, they’re two totally different trousers for different needs, it’s interesting in that although the weight difference is minimal, the wear experience of the First Tactical V2 is much lighter and cooler than the Defender. The polycotton mix also gives a good range of strength whilst remaining breathable and comfortable and that comfort can be reinforced via the inclusion of internal knee insert points so you can slip in a First Tactical knee pad, which is now available in the UK market.

Pockets, in comparison to the Defender are considerably less. This in of itself is not a bad thing, as even over a year later of wearing the Defender, I still get confused as to which of the many pockets holds what I need!

The defender simplifies things a bit, replacing the map pocket zip with a Velcro flap which avoids the issue I had on the Defender of the internal pocket loop getting caught on the zip. The internal compartments are still there and you still have eight pockets in total for all your carrying needs. I do miss the ankle pocket however, but that was because it really was very useful for my needs.

You’ve got a YKK zip for the crotch and a Prym snap plus button for securing the waist with stitched fabric belt loops. With the ARMS system and that stretch, you get a really comfortable fit and I find the sizing of these trousers to be particularly accurate – sometimes it can be hit and miss, especially when it’s a US company.

The end product is a robust, comfortable and flexible pair of trousers that not only work well as a tactical trouser, but as I mentioned, they fit the bill for everyday wear as well. I’m absolutely not a fashion person at all – yet I’ve had several compliments passed about the First Tactical V2 and how good they look, and they do look good. I think the khaki colour pulls off a much more refined and all round look than the others and when combined with a pair of AKU Selvaticas for example, it creates a definite style that works well in most scenarios. 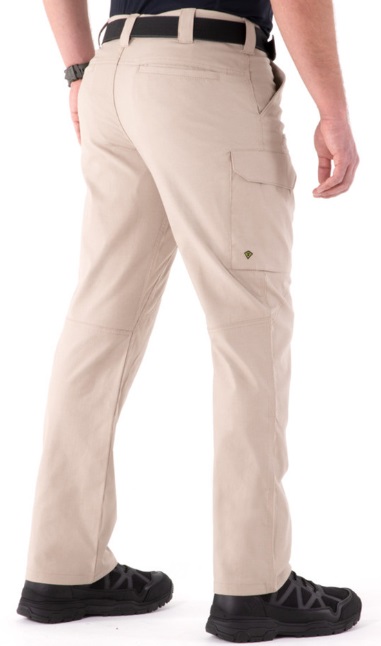 As noted, they are marginally lighter than the Defender but the overall wear experience is significantly improved – the Defender wear was never bad, but I always knew I was wearing them if that makes sense. Not so with the V2. Even when I’ve had to run (which I try to avoid if I can!), the ARMS two way stretch really let me open up and go for it; there was no catching around the front of the knee as the trousers try to fight against the upward lift, or drag around the crotch as they struggle to give the leeway needed for a good running stride.

More importantly, at £60 compared to the Defenders £139, they’re far more palatable on the wallet and I feel like I can justify that spend without breaking out in a sweat at what I’m about to pay for a pair of trousers. Also, if I’m being honest – yes, the Defenders are excellent and have a lot more engineering about them but I really don’t think the V2 is a million miles behind and has a lot to offer, so in that respect, they’re an absolute bargain.

If you need a pair of tactical or just good, sturdy, man about town with pockets and rip stop trousers, then I’d highly recommend them. They’ve fallen into my daily wardrobe selection and do a great job both in work and out.