First Casualty; the untold story of the battle that began the War in Afghanistan
Written by Toby Harnden. ISBN: 978-1-78739-646-3. Published by Welbeck 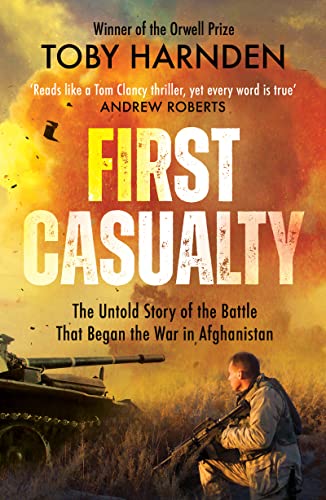 ​
Toby Harnden is a winner of the Orwell Prize for books. A former foreign correspondent for the Sunday Times of London and the Daily Telegraph who reported from thirty-three countries, he specialises in terrorism and war. Born in England, Harnden was imprisoned in Zimbabwe, prosecuted in Britain for protecting confidential sources, and vindicated by a $23 million public inquiry in Ireland. A dual British and US citizen, he spent a decade as a Royal Navy officer before becoming a journalist. He holds a First Class degree in modern history from Oxford and is the author of Bandit Country: The IRA & South Armagh and Dead Men Risen: An epic story of War and Heroism in Afghanistan. Previously based in London, Belfast, Jerusalem, Baghhdad and Washington DC, he lives in Virginia.

The West is in shock! The US is a wounded beast! Al-Qaeda terrorists have struck America on 9/11 and thousands are dead. Within weeks British Special Forces enter the fray in Afghanistan alongside the CIA's Team Alpha and US Troops. Victory is swift, but the peace is fragile. Hundreds of jihadists surrender and two members of Team Alpha enter Qala-i Jangi, the "fort of war" to interrogate the prisoners. The prisoners revolt, one CIA operative is downed while the other is trapped inside the fort.

Seven members of Britain's elite Special Boat Service (SBS) volunteer for the rescue team and race into danger. The six-day battle that followed proves to be one of the bloodiest of the Afghanistan war, a fraught and ruthless fight that would be a haunting foretelling of the conflict to come.

Harnden has researched his subject superbly and that combined with his unprecedented access to the CIA, SBS and US Special Forces has brought about a book that many of the great thriller writers of today would be happy to claim as their own! He takes his time developing the story and introduces characters as and when they appear. His descriptions are akin to a portrait painter, so there is no doubt how a person, terrain or objective would appear.

At first glance the book seems to be any one of the myriad "war stories" produced by ex-members of Special Forces. This isn't. It is a factual account, written by a person who has interviewed those involved and travelled to the areas to get a feel for the terrain. His vast knowledge of both the political scenario at the time and the military picture have given him an advantage with the background to the story.

An excellent read, putting the reader into the eyes of the combatants, one can almost taste the cordite and smell the fear. Highly recommended to any student of Special Forces or Modern Warfare. I can only give one mark for this book, 5/5