A review by Fife Major: 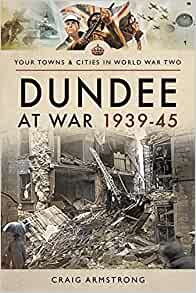 Being a Dundonian born a few years after the end of WW2 and having begun my thirty year military career in Dundee with the Invergowrie TA, I consider myself in a comfortable position to review this book.

With no disrespect to the author, I found the content of his book quite lightweight and felt it contained too many dry and unnecessary statistics. To be fair to the author, Dundee suffered very little bomb damage in this war and compared to WW1 relatively few casualties and deaths, especially in the civilian population. This would make it difficult for him to produce a book of much greater substance. The content is well researched, and I envisaged the author encamped in the building of DC Thompson scouring every copy of the Dundee Telegraph and Courier from 1939-45 in an attempt to add greater depth to the content of his book.

Having read the book I was left with a mixture of feelings; enjoyment, sadness, frustration and pride.

Enjoyment at the amusing stories such as one of the drunk taxi driver, sadness at the number of deaths, especially among RAF airmen and at the young age at which most of them perished.

My strongest emotion, frustration, comes from the author filling the gaps in events by resorting to trivia such as the amount of raspberries produced in 1940 compared to 1939. I failed to understand why he gave the addresses of all those KIA and MIA. A number of those addresses no longer exist, and of those that do, the residents will have changed many times by now.

Page after page was devoted to Dundee's charitable support of the War Effort. Such valiant causes as 'Wings for Victory' week and 'Salute the Soldier' week were extremely laudable and the citizens and investors of Dundee must be congratulated for exceeding the financial targets they were set. I did not, however, need to see a spreadsheet listing the twenty investors who invested over £10,000. Nor did I have any use for the information that the tellers at the Savings Bank took in investments of £27,317 on Saturday 22 April, 1944, consisting of £15,664 in savings bond deposits, £5,000 in 2.5% Savings Bonds, £2,828 in National Savings Certificates and Stamps, £2,640 in 3% Savings Bonds, etc. This list goes on and on, detailing the amounts the various schools collected, the Air Training Corps dance which raised £18 for 'Wings for Victory' and more. All of this public effort is laudable, but detailed data like this makes the book dry and dusty.

The main causes of my frustration lie in what the author missed. This book is a great opportunity to investigate the reasons for the surrender of the 51st (Highland) Division. The loss of the 51st Division in general and the Black Watch Battalions in particular, were felt deeply in Dundee. Even as a young boy in the 1950s, I remember people would mention the surrender in hushed tones. The sense of betrayal was never far away, and Winston Churchill was deemed to be the main culprit for the sacrifice and abandonment of this great fighting unit. It was felt at the time that Mr. Churchill and the people of Dundee despised each other in equal measure.

I felt my final emotion, pride, in reading the accounts of Dundee's people at war. The work of the Home Guard and the bravery of the armed forces, supported by the civilian population, came through in abundance. None more so than the exploits of W/Cdr Hugh Gordon Malcolm VC MiD, who at the age of 25 became the first Dundonian to receive this auspicious award. I would have liked this book to include more about the life of W/Cdr Malcolm. As with the surrender of the 51st, I felt that the author missed a golden opportunity to give the reader greater insight into this brave officer.

Finally, on a personal perspective, I, like Pte George Weir who was killed in action serving with the Black Watch, was an apprentice moulder at the Lawside Foundry (now long closed) and worked there for a number of years before joining the Army. To the best of my recollection no-one ever mentioned his name and there was certainly no blue plaque commemorating his life. Likewise I would often stay with my Granny in Caldrum Street and play in the street with the other children. Craig claims that this street was strafed with cannon and machine guns by a German aircraft, yet no-one, whether adults or the children I played with, ever mentioned the incident or pointed out any bullet or shrapnel damage to the buildings. I put this, and the non-commemoration of Pte Weir, down to the fact that Dundonians just got on with life after the years of war and the hardships they had endured.

In summary, a slightly frustrating read with too much data and not enough information, but worth two mushroom heads for the author's research work.