London, February 1574 and winter tightens it's grip on a city wracked with paranoia. Suspicion and superstition are rife and violence is is commonplace as London is consumed with rumours of papist plots and a Spanish invasion and a passing word or a spiteful comment is enough for a woman to be accused of witchcraft and executed by burning.

Dr Christopher Radcliff is a former Cambridge Don, a lecturer in Law, who had left his college after being accused and arrested for murder. Now, through the good graces of Robert Dudley, Earl of Leicester, he is an intelligencer, a runner of agents, spies and informers. He is on the staff of Dudley, well regarded and trusted but must work and prove himself constantly to maintain that trust, for the shadow of the Tower is never very far away.

Counterfeit coins are being circulated through the city, via gambling dens, taverns and brothels, all bearing the likeness of Robert Dudley, enough reason to cast the shadow of treason over the Earl. Add to that, slogans suggesting treachery at court, maligning the Queen are being daubed on walls around the city, all kindling for a great fire that could consume London and the Queen. Radcliff and his colleagues must find the culprits and end the doubt and uncertainty.


Andrew Swanson read Law at Cambridge but being inspired by Modern History, became instead an accomplished writer. His previous books have featured Thomas Hill, a spy set against the background of the Civil War. There is a prequel to this book, called 'Incendium', although it is not necessary to have read it first.

I like historical novels, and I like this one. The hero, Radcliff, is not a superspy, not a great warrior but rather more normal than that, with human frailties and foibles. The story cracks along at a good pace and there is a wealth of detail in the telling.
A most enjoyable read, so much so that I have since sought out his other books and bought them. Well worth reading. 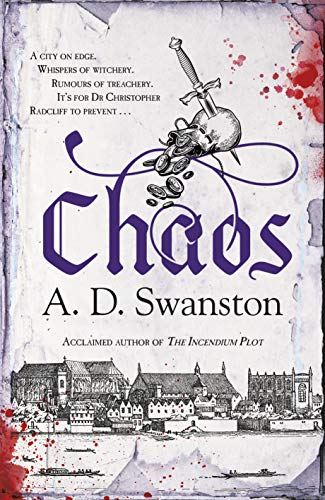