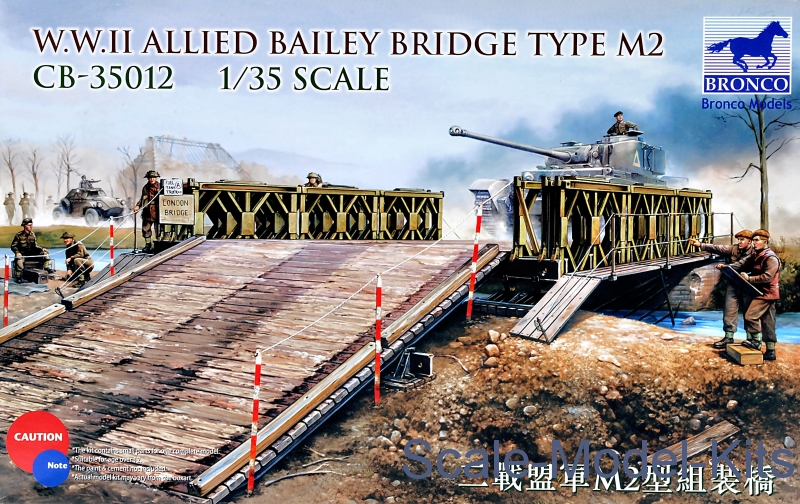 This model ended up on my doormat after a protracted battle with flea-bay and PayPal. I ended up paying nothing for it and was originally considering doing it for the D-Day Group Build, but after closer inspection, decided to let it go and become a static elsewhere.

The Bailey Bridge system was invented by British Civil Engineer Sir Donald Bailey (1901-1985) and was of modular design allowing virtually any bridge configuration be built as required. The bridge was adopted in early 1941 as the standard Military Bridge and was used extensively throughout the European campaign after D-Day and was also licence produced in the US as the M2 and the same basic design is still in use today.
The bridge consisted of 10ft (3m) long sections supported by 19ft 11inch wide transoms and 10ft long stringers under the bed sections resulting in a 12ft 6inch wide roadbed.The side support panels were 10ft (3m) long cross-braced rectangles with two or three used depending on the bridge strength required and some bridges also had the panels mounted one on top of the other for additional strength.

This kit represents the M2 variant with parts provided to build a double-truss single-story or as designed the triple-truss single-story bridge and provides you with three 10ft bridge sections and enough side panel sections to build the three side truss panels for each bridge section (18 in total) plus the two on/off ramps which are also 10ft long sections. Also included is the optional side troop walkways used on some smaller bridges to make a typical WWII Bailey Bridge up to 30ft in length but as with the real bridge using additional kits would allow longer spans to be built.

In the box is just on 700 parts in olive drab plastic, a small etched fret, 12 brass rods for the troop walkway railing and a length of twine for the railing rope with the largest parts being the 7 bridge sections which have wood grain embossing included that is not marred by any pin marks or other blemishes and also have the underside stringers included with the mouldings plus the 11 long transoms on which the whole bridge assemblies are mounted. 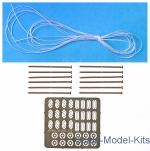 The remainder of the parts are all quite small with each of the side truss panels made up of a minimum 22 parts each and with a total of 18 side panels to be built gives you some idea where all the parts come from.

Moulding quality is quite good with virtually no flash but there are many small mould release pin marks on most of the truss parts as these have details included on both sides and the pin marks are unavoidable. They are thankfully quite shallow and while tedious shouldn’t pose any real problems removing but does mean there is quite a bit of cleanup on the parts before assembly.

Another thing to note is quite a few parts for the side truss panels look very similar but have very subtle differences especially on sprues I and K and you will have to take very careful note of the instructions so as not to mix up the parts. It is also advisable not to cut the parts from the sprues until needed as again it is very difficult to tell them apart once removed and this will slow down construction a little.

Basically the two inner side truss panels on each of a bridge sections use the sprue I parts while the third outer truss panel section uses the sprue K parts and the instructions do clearly show the different assembly sequences for each so as mentioned take care here.

A similar situation exists with the bridge bed sections where the ramp parts GA and GB have subtle differences as do the main bridge parts H, probably worth marking them prior to building.


The 11 long transoms are fitted three to each main bridge section (total 9) with each transom having four very small plastic fittings added to each end and the remaining two transoms are used to support the on/off ramps although the instructions don’t show these fitted but the box art does so you can use this as a guide.

On test assembling one of the side truss panels the two top and bottom rails didn’t line up at one end and some minor trimming may be needed but the large locating lugs on the these parts make for a sturdy fit and take care as the three vertical rails are trapped between the two part top and bottom railings during assembly.

One thing to watch is while there is no actual warping the long top and bottom beams can bow a little and you should ensure they are lined up correctly as you glue them together, this also applies to the long transoms positioned under the bridge bed sections but so long as care is taken there shouldn’t be any problems.

With 18 of these side panels to be assembled once you work out the best assembly sequence it should get easier as you go along but given the number of parts and intricate assemblies you won’t be putting the kit together overnight and care will be needed as mentioned above.

The 8 bridge end supports are also made up of multiple small parts and again there are different parts that look almost identical on sprue F and careful study is needed to ensure you use the right part in the right location. One issue with the instructions here is they don’t tell you to make 8 of these assemblies or which goes left or right on the assembled side truss panels apart from a small unmarked diagram at the end and extra care is needed to get these in the right position.

The side troop walkways have the planking moulded together in one piece with again subtle wood grain included but most photos show there are four long planks with spaces between each instead of the one solid plank. It wouldn’t be that hard to cut the planks apart and reposition with the small space to better represent to typical configuration.

Included with the kit are the 12 brass rods for the walkway railing and these have additional small etched parts added for the guides to secure the thin twine provided for the railing ropes and these will look quite impressive when added to the walkways. Strangely while you get the six sections of walkway to match the bridge bed sections there is no on/off ramps provided for the walkways as depicted on the box art meaning you will have to make these from thin card if required.

The instructions are the usual exploded view drawing type and due to the complex nature of the assemblies careful study will be needed before removing the parts from the sprues and during assembly to get everything in the right place. I think better explanation would improve the modelling experience. The plans could be a lot better with multi-dimensional views and clear, less-ambiguous wording.

Conclusion:
As with the real Bailey Bridge this kit is made up of many small parts and one thing is for sure the kit is not for the inexperienced modeller due to the number of small parts and quite complex assemblies.

There is a fair bit of cleanup required with the many shallow pin marks but these will prove to be more tedious than difficult to remove and while there are some minor dimensional discrepancies the kit will build into a very nice representation of the WWII Bailey Bridge.

From a Modeller's point of view, this is one of those kits that will always be "in the background" but the bridges were an important part of D-Day and onwards. I will give this two and a half out of five, primarily because the plans and instructions aren't up to much. Fortunately, there are plenty of websites containing build information.

2½ out of 5, instructions let it down