A few years back, when the official files on Operation Foxley were released, there was a great deal of furore and speculation in the press and the mainstream media about the plans, various lunatics and nut-jobs came forward offering their opinion and how their uncle/ Auntie was chosen for the job ! it was worse than the Hitler diaries. The sheer irony of Adolf having been dead for 70 odd years was lost on a fair proportion of the journalists and public at the time. 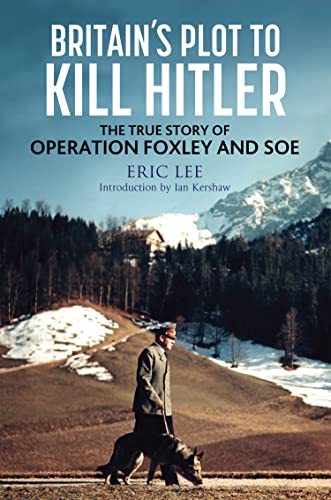 I recall reading articles in the news, but so much of history is dry and long dead, unless you can bring the people at the very centre of it back to life . Rather like a good play, setting the scene, and fleshing things out, and in this respect Eric Lee is well qualified, and must be congratulated in bringing all of the actors on to one stage. They say that truth is often stranger than fiction, and here in this marvellous very readable book, you could be forgiven for wondering whether you have chanced across a complex work of fiction in the James Bond mould.

The book is essentially in two halves , the latter half contains everything on record about Operation Foxley, so I will start with that section. First, some of the typed pages are a little hard to read, at first I thought that they had been copied badly, but looking at the pages you can see evidence of poor storage and damp, but this does not detract in any way from their historical importance.

The sheer weight of research and the microscopic detailed analysis of the Fuhrer's background and lifestyle are all the more stunning given the distance in time, and the lack of electronic eavesdropping, miniature cameras and things such as Google earth that we are all used to in this modern age. And yet here in these pages, we have the 1940s equivalent of Google earth, the exact same images that were supplied to the team in charge of creating the operation. Neither is the smallest most insignificant detail absent. Plans and drawings of each of the buildings at the Berchtesgaden, aerial photographs, accurate maps, line drawings and sketches, photos of the entrances and approaches, pictures of Hitler's personal train, even accurate line drawings detailing the fuelling and replenishing of water and food, no detail is missed. Close up snapshots of Hitler's entourage and other Nazi leaders, their choice of vehicles and pennants, it's stunning in its detail and accuracy. Nothing it seems is overlooked - in fact if you were planning to visit the area today, this would be better than any guide book

In the carefully typed text , is every little details about Hitler's life, his eating habits, his exercise regime, every little detail about the military that surround and protect him, even down to their favourite watering holes. That in itself would make a wonderful and informative book, but, the story needs to be fleshed out, the characters in the play brought to life, their foibles, their habits, their strong and weak points. And in the first part of the Book Eric Lee richly rewards the reader, and shows us that no matter how much knowledge and information you gather , there are always subtle and cogent points that you miss, or interpret incorrectly. The sheer fact that Adolf liked to walk alone in the woods with only his Dog for company points to the fact that his security detail was well trained and efficient, and yet !

Eric takes you back in time a little and details the other plots on Hitler's life, that would have succeeded in killing him instantly, but for the strange mood swings of Stalin, he would have been eliminated easily. Having read Ben MacIntyre's excellent book, Agent Sonya, I was aware of the plot to blow him up in the dining room where he used to eat, and how slack his security detail were on familiar ground. Eric Covers this in great detail, and the many other Russian plots, but then the plot thickens , for much of the plan of Foxley, bore stark similarities with the 1941 film Man Hunt starring Walter Pigeon, based on the acclaimed novel Rogue Male, whose author Geoffrey Household was himself an SOE agent!!

Of course even allowing for the fact that getting a man close enough to shoot Hitler, a Man who could pass for a German, think like a German, and speak like a German, the chances of it coming together are fairly slim and suicidal for the poor sod given the task. Here the author brings him to life , only to then point out that this man, who was an acclaimed weapons expert, and a German speaker, suffered from astigmatism. To make matters even more perverse, one of the leading lights in the plan had been badly injured by a falling piano !! you could not make it up, but its true.

A backup team was proposed, supplied with an anti tank weapon preferably of German origin to take out the Fuhrer, if the assassin missed. It was thought that the armoured Mercedes would be vulnerable to a Panzerfaust, but even this complex plan was not the only one being considered. A Plot to poison Hitler via the water tanks in his train, with a little known poison called Thallium, was used later on in the Agatha Christie Novel 'The Pale Horse'. Did somebody perchance relate part of Operation Foxley to her?

The Author gives a detailed and accurate analysis of the methods that would have been used and the likely chances of success, and yet ?? Another plot was in hand, so wild and unbelievable, that were it not for the research of the Author , you would discount it as a wild tale. This was the plan to hypnotise Rudolf Hess, and send him back to Germany to kill Hitler. An entire chapter is given over to this very real plot and its chances of success. Of course a secondary plan to annihilate the Fuhrer by the use of accurate and powerful air dropped weapons was also mooted, and in fact carried out, but a little late as the bird had flown the roost, and was now living in his bunker, where shortly he would take his own life.

All of these plots seem to fantastic and wild, and each one is covered with such a fine degree of accuracy and background detail, as to leave the reader in no doubt of their veracity, and then debated upon the relative chances of success, even the mistakes and assumptions made by our security services about Adolf's secretary, who was in fact a little more than that! The Americans is seems, not to be outdone, had a plan so wild and silly, that were it a carry on film you would fall about laughing, but I will let you read the book to discover that one.

This is a fantastic and well researched book, well balanced in its research , full of detail and with many links for further reading , I found the complex web of deception frightening in its extreme, in fact were I a particularly unpopular Russian Leader, then a copy of this would be on my reading list

200 pages including hundreds of pictures and maps, technical drawings , and every little background detail about Adolf Hitler. An amazing and informative and well researched read, and a guide to modern day spooks to double check every little detail,