Uganda’s civil war with Joseph Kony’s Lord’s Resistance Army has raged since the 1980s, claiming over 100,000 lives and
displacing around 1.5 million people. Kony’s rebel force, who combine religious mysticism with extreme brutality, have abducted tens of thousands of children: their child soldiers. Their insurgency continues to this day, though most of us
know little about it. Norman Okello was only twelve when he was abducted by the LRA. In captivity, he was subjected to a ruthless training regime aimed at turning him into a killing machine free from conscience and fear. Forced to commit unspeakable acts of violence, Norman struggled not just to stay alive but to hold on to the last shreds of his humanity. When he finally escaped the clutches of the LRA, he faced his next ordeal: trying to reintegrate into a society that feared and despised him. Harrowing, heart-rending and enlightening in equal measure, Boy Soldier is above all a story of survival and redemption against unbelievable odds.

As an introduction to the book I feel I must tell you about the publisher UNBOUND who are the Worlds first crowdfunding publisher established in 2011. If this book is a sample of the material that they produce I'd buy shares in them ASAP.

My heart sank when I opened the packaging and saw the book, as I already know a fair bit on this subject after seeing documentaries and articles on the very sad subject of these African boy soldiers who are kidnapped and used as killing machines for various rebel/ terrorist groups. By virtue of having to kidnap children as young a 11 /12 to maintain their army makes them terrorists in my book.

Norman was 12 when he was kidnapped by Joseph Kony's Lords Resistance Army ( LRA ); within hours of his capture he was whipped almost within an inch of his life then made to march through bush and desert into Sudan to start training to be a rebel soldier. Its a harrowing story of how he managed to make the full journey whereas many others did not, all the time being hit and told " I'll kill you if you don't......" do what ever was demanded of him.

We are taken through the training process through his initiation ceremony and into battle where over a few years he became a stone cold killer and fine all round boy soldier who specialised on mortars. It is a very savage and brutal story even more so when the method behind all the madness was explained and I felt myself saying in my head "that makes sense". I had to pull myself back into the real world, its not just about the brutality, we are shown how to take a boy and make him and efficient soldier. 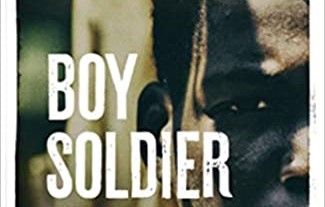 ​
Joseph Kony was a lucky man as he able to talk directly with God and by the use of Christian and Juju he could make his soldiers invulnerable to bullets, which is handy in any army, those poor souls who did manage to get hit by bullets or grenades obviously were not up to God's high standard. The Soldiers driven by fear of being beaten or killed by their own comrades were fully isolated from reality and the only way to survive was to become the best killer. Because they were half starved and always under the threat of death none of the soldiers became friends as a matter of survival . Norman eventually gets noticed and is given rank which only just makes his life a bit more bearable until he makes an enemy of his section commander.

I'm not going to continue the story but it is so well written warts an all its informative about the way rebel group take, train and command children into making them very effective fighters. Buy it or I will kill you! There is some little salvation in Norman's life and I am so glad I was granted the privilege to read his story. Five mushroom heads and it will take a blockbuster of a book to beat this story this year.