Spanish civil war books have tended to look at the overall conflict rather than focusing on the armoured warfare sector. S J Zaloga produced a book about eleven years ago (Spanish Civil War Tanks) and IWM have some reference material. There is a raft of accounts of bullets, broads brandies and bulls plus plenty of accounts of the International Brigade by a raft of authors from Hemingway onwards.

Anthony Candil is a retired Spanish army officer whose late career was as director of the Leopard 2 program at Spanish MOD headquarters in Madrid. Earlier service included armoured courses at Fort Knox and the German army course at Munster. Following retirement from the Spanish Army he turned his talents to a comprehensive review of the employment of armour by both sides in the Spanish Civil War.

The book starts with an overview of the Spanish Civil War operations to provide a framework for the non-historian. The author then looks at the pre-war Spanish armour doctrine and equipment , the first tank being a solitary FT-17 purchased from France in 1918/19. This was followed by further small purchases and a handful of Schneider CA1 assault armoured vehicles, the latter perhaps falling midway between tank and assault gun. A limited use was made of these vehicles in North Africa. However poor reliability and perhaps poor ammunition choices did little to advance the cause of armour in the Spanish Army, Furthermore there was a turf war over who would control these new weapons systems. The artillery felt that they had a more mechanically minded soldiery while the supported arms were suspicious of funds moving to the artillery. (Some readers of a particular generation will remember the turf war over AFV 438 between the Royal Artillery and Royal Armoured Corps.) For a time the Spanish army saw tanks as infantry or artillery tanks.

Having no experience of tank units in major war the Spanish Army saw the tank as a weapon to support infantry rather than as weapon to manoeuvre in larger formations. The works of JFC Fuller were not a major force , especially among the general staff and in any event the agrarian nature of the Spanish economy did not provide the mindset or industrial base to encourage AFV production and development.

With the scene set for war the writer then focuses on Russian, German and Italian intervention and equipment supply. The Italian involvement may be a surprise for the non military reader but Italy supplied both men and equipment. The Russian involvement ironically centred around the T26 tank , a development of the Vickers 6 ton tank. Russia had one of the larger armoured forces of the 1930s. Their force was 4 Mechanised Corps,6 independent mechanised brigades and that old favourite of GSFG 6 independent tank regiments. What was lost in reliability was compensated for with weight of numbers.

There are a good pair of chapters observing the organisation and structure of the Nationalists and Republicans. The war is played through in 4 further chapters. There is then an excellent look at anti-tank warfare. The studies of the integration of armour and A/T weapons including Flak18 and Pak35/6 might have been a good guide to the doctrine to be adopted by the Afrika Korps in just a few years. Logistics are also examined in detail

The book rounds up the arguments with a final look at equipment and armament.

Tank Combat in Spain is a good addition to the book shelves of armoured students and historians as well as Spanish Civil War buffs, Casemate print to a good standard and the well chosen illustrations are on good glossy paper. There are good footnotes , a decent index and a comprehensive bibliography. The cover price is £25 with copies on Amazon from £20.09 (Kindle £20.00) 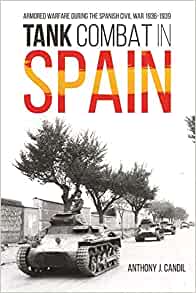