Overview Discussion
Leave a rating
The Black Diamond Storm head torch was an impulse purchase whilst out in Austria skiing. Being as tight as I am, it took me about thirty minutes of playing with a selection of torches and checking the details before I settled for the Storm. I'm sure the shopkeeper of Gunther's Skis in Alpbach thought I was going to do a runner out the door with it as I was there for so long.

However, it didn't take me long to realise I had made the right choice, and an affordable one at that - I paid 55eu for it, which I was happy was in the price region for the unit. Black Diamond are also a well established and reputable firm with a strong outdoor heritage. When it comes to torches it's easy to get caught up in the myriad of pretenders or Far East knock-off's that sound good on paper but are as much use as a chocolate fireguard.

The Storm bangs out 150 Lumens, and if you don’t know or understand what a Lumen is, enjoy the incoming headache if you decide to go and read up on it. A 25 watt lightbulb equals 200 lumens, to give an example. Unfortunately, long experience has taught me that actually the overall Lumen means nothing, it depends entirely on how the manufacturer measures the output and how it actually functions in a real world setting.

My primary deployment for the Storm was night admin whilst skiing as well as daily road running at night up through the mountains (where I'd reward myself with a half pint of rum milk before running back down!). In pitch black conditions the Storm was more than capable of fully illuminating everything around me in whichever direction I faced – the adjustable beam power setting also helping me to ensure I had the required level of visibility versus power consumption. Many head torches simply opt for the ‘on or off’ mode, which means you risk a quick eat through of batteries if you can’t dial down the power.

The Storm setup is a QuadPower LED, two SingelPower white LEDs, and two SinglePower red LEDs which give the 160 lumens, as well as two red SinglePower LEDs for preservation of night vision. 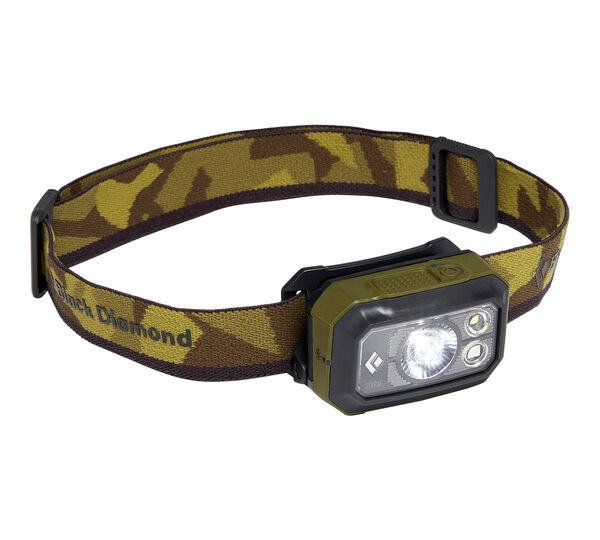 You adjust the output on the storm by simply holding down the power button on the top of the unit. At maximum power, the light will extend out to 70m. On the Quad, you'll get 200hrs of run time, and on the SinglePower LED's you'll get 120hrs.
The lowest output setting will give you a throw of 7m of light which is perfect for admin duties when you don’t need the full field of view. To switch between them, you just tap the power button a number of times depending on what you need.

The Storm runs on 4 AAA batteries which are included with the unit, and I’ll highlight the importance of being battery operated. This fad to have everything work off a rechargeable battery with USB charge cable is just ridiculous. There are some items that simply need to be fed by replaceable batteries. Torches and MP3 players are two such examples! There’s a useful battery indicator on the side of the unit that’s clear to read, and again the benefit of a battery ran unit is you just stick a pack of four in your backpack for when you need them.


​
The unit itself is an attractive, robust housing with a durable strap with full adjustments. The batteries are accessed from the rear without any fiddling about. It weighs 110grams with batteries fitted and it sits comfortably on the head. You never quite forget it’s there but it’s not akin to wearing some daft caving torch with battery pack. I did have to make several minor adjustments to position whilst running, but it’s that fine line between cutting off the blood flow to your head with the strap or letting the torch find its own resting spot on your forehead. The strap also did a fairly good job of absorbing any sweat, and a quick soapy brush off in the sink kept it fresh and clean.


Overall, a cracking bit of kit that hasn’t let me down and has kept me safe across some fairly challenging terrain – well worth the money.

Two Year Update: This unit is still available but has been replaced by a model that has 350 lumens for around the same money. It’s a no-brainer to go for the higher spec system. The unit itself has taken some serious knocks (off the roof of my car at 20mph after I forgot it was there!nd has kept on trucking – no issues or concerns over durability of the unit and would recommend to anyone in the market for a decent head torch!