This mid-sized hardback is written by David Bilton, author of 'The Hull Pals', later filmed for television as 'The Trench', and of a companion work on the badges of Kitchener's New Army. This volume sets out to be a definitive guide, down to battalion level, to the badges and signs (cap badges, shoulder titles, divisional signs, etc) of the regular, regular reserve, and extra reserve battalions of 74 regiments of the Regular Army, covering both officers and men and any unique specialists' or discrete functions' (eg transport, bandsmen) distinctions.

Clearly a labour of love, the book shows the benefit of research begun when many veterans were still alive, as the detail from period collections of evidence and original objects (photographs of many of which are included) is supported by statements from those who wore the badges at the time. This is complemented by useful potted histories of the battalions concerned and notes on other handy identifying factors beyond the badges, titles and flashes themselves, such as the manner of wearing of puttees, for example. 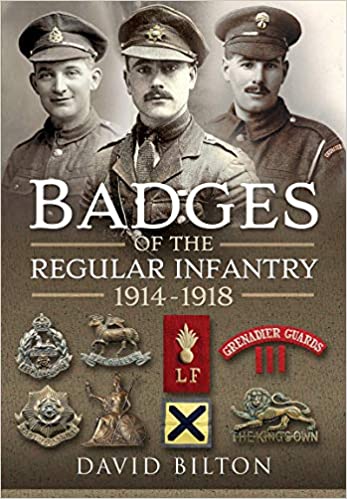 Partial efforts to conserve this information began early, even during the war, and is enlightening when it comes to distinguishing marks for battalions, as it evidences the dim view of some Regulars of what they saw as an unnecessary New Army practice. Nevertheless it was widespread enough to be worthy of record and Bilton painstakingly goes through the regular battalions (generally first up to fourth) of all regiments that had these, providing the evidence, making some inferences where necessary, and quoting veterans' recollections where available. The level of detail is remarkable, even down to chronicling, where recorded, unique identifiers used in specific battles, as well as oddities spotted in period photographs such as the persistence of the use of obsolete shoulder titles in the Northumberland Fusiliers, for example.

Consisting of 44 pages of prefatory material, 297 pages of text and five pages of bibliography, sources and further reading, the book begins with acknowledgements, an introduction to the topic and principal period sources, a brief background section of two pages dealing with the history of distinguishing signs, and two illustrated sections on WW1 divisional and brigade signs. It then goes into the main text, regiment by regiment, as described above.

Helpfully for someone wanting to use the book to identify period photographs, it is handsomely illustrated with many (mostly very clear) colour photographs of original objects and black and white reproductions of original soldiers' photographs to support and illustrate the detailed descriptions given. My one small suggestion for improvement would have been an index for the benefit of those not sufficiently familiar with the order of precedence of regiments, which is the organising principle of the book. A book to be dipped into rather than read cover to cover, nonetheless it will be a valuable addition to the researcher or collector's bookshelf.