Gabriele Esposito is a prolific author and researcher, specializing in military history and uniforms. Armies of Ancient Italy will be of interest to classicists, historians (amateur and professional) and re-enactors.

There are many books about the late Roman Republic, the Roman Empire, its rise, decline and fall. Some of these are contemporary accounts written by authors such as Sallust, Suetonius and Cicero. By contrast the Roman Monarchy and the early Republic are less-documented and are known mainly from accounts written much later. It is an area where tradition, archaeology and history overlap. That is one reason why this well-researched book is so welcome: it literally fills a gap in many people's knowledge.

Early Rome was an exciting time of almost non-stop, albeit seasonal, military activity, with the Romans often the aggressors. At an early stage the Romans arrogantly decided that it was their manifest destiny to rule the whole of Italy; rather as the USA has from time to time tried to impose its hegemony over the whole of the Americas. Both met with resistance. Rome's eventual triumph was due to the discipline and toughness of the Romans in general, of their soldiers in particular and to the ruthlessness of their commanders. Having united Italy under their rule, the Romans would go on to conquer much of the known world and achieve an unprecedented naval supremacy which lasted for centuries. It was a remarkable feat for a small city-state. 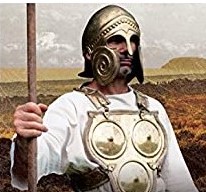 Nevertheless it was not a foregone conclusion that Rome would emerge as the winner. Rome was only one among many Italian States; some as small as Rome itself and others not so small. To name but a few: To the north-west of Rome lived the Etruscans, a highly civilised and military people, in the area now known as Tuscany. They resented Rome's rise and had moreover provided Rome with its last royal dynasty, the Tarquins. What is now northern Italy was then Cisalpine Gaul, inhabited by barbaric and warlike Celts who at least once came close to wiping Rome off the map. Southern Italy and Sicily were known as Magna Graecia (Greater Greece). Its sophisticated Greek inhabitants regarded the Romans as upstart barbarians and were determined to resist them. They retained close links with Greece and Macedon and did not hesitate to call in their greatest commanders, such as King Pyrrhus of Epirus, when Rome threatened them. Even more dangerous was the maritime power of Carthage on the other side of the Mediterranean. Carthage was equally determined to become the leading Mediterranean power and was usually in a state of hostility to Rome.

The illustrations of this book are a revelation. Not the usual reproductions of Roman bas-reliefs and statues, but photos of modern re-enactors wearing carefully reconstructed uniforms and armour based on archaeological finds. This is a fun book as well as being very useful and informative.