​
The sound of thunder rolled ominously across the grey sky as people ran for cover. On the distant hilltop, the black outline of four mighty steeds with four motionless riders sat atop could be seen. People fell to their knees, arms outstretched, begging for mercy as the Apocalypse fell upon them.

Or at least, that’s what must’ve happened, as it appears the MOD Procurement have got something right for once, and we all know it’s a snowy day in Hell when that happens!

After many many long centuries of soldiers wearing completely and utterly inadequate footwear for the intense tasks at hand, we can stand with a tear in our eye and wave goodbye forevermore to the likes of Ammo boots, designed to slowly kill the soldier from the foot up with trench rot and which was phased out around 1918 for the Field Service Boots which were simply sexier wellies. We can sniff appreciatively at the slipper like Direct Moulded Sole (DMS) introduced around 1958, which like a slipper, offered bugger all protection against anything. DMS, having been taken round the back of a shed and shot during the mid-1980’s, was succeeded, relatively unsuccessfully, by Boot, Combat High or Boot, Cardboard Horrible or By Christ it Hurts or… etc, etc. Renowned for causing acute tendinitis due to the relatively inflexible nature of the boot heel, it was loved like a bastard offspring from a one-night stand.

Finally, we can all stand, arms around shoulders and heads bowed as we remember our dear friend, Combat Assault Boots (CAB), which were designed with the shareholders of Kiwi boot polish in mind. Still basic, it had a somewhat better design that those gone before but was, still, ultimately, crap.

Looking at that list of fine specimens, we wonder why on this green earth, it took so sodding long to realise that boots needn’t be made wholly of leather, that boots needn’t demand polishing (which usually only serves to reduce the breathability of the boot by blocking the pores of the leather) and that we didn’t need boots that crippled soldiers.

To replace these abominations, we can wave in a new era with the, rankly and in terms of issue boots, the revolutionary Pilgrim GTX FG in MOD Brown, otherwise known as Combat High Liability Boot.

Based on the AKU Pilgrim GTX Mk II, which was a frankly stonking bit of footwear, the new Pilgrim GTX FG is possibly one of the first examples of an issue boot matching it’s retail brother almost to a mirror view. Before however we start slavering with excitement, let’s start from the beginning.

The Pilgrim GTX FG retails for £199.95 from Trekitt.co.uk or free if you happen to be employed in one of the finest professions known to man. It’s available in brown or black and sizes 3-15 which is ideal for both the petite persons and performing clowns alike, and it also has a medium and large option for width.

From the bottom up, the Pilgrim GTX FG is the proud owner of a Vibram Foura sole. Immediately, the signs are good due to the presence of a brand name we all know and trust. Made from black rubber Nitrile, the Foura is abrasion, slip and heat resistant as well as being anti-static and resistant to a variety of POL (Petrol, Oil, Lubricants).

The treads have a decent pronouncement from the sole which gives the Pilgrim GTX FG better grip and increases longevity against wear and tear and the boot is designed and tested around supporting a weight of 45kgs.

We all know that we often carry substantially more weight than 45kg, but it doesn’t mean the Pilgrim GTX FG will fail, it just means that the increase in compression on the midsole, etc, may cause a slight dip in the comfort and support provided.

The footbed, which sits just above the sole is a Cambrelle Ehtylene-vinyl acetate model, again another strong brand name with decades of experience to fling at a boot. We can see that for once, cost doesn’t appear to have been the overriding factor in the contract specification for a new general issue boot. How refreshing!

So far, we’re looking at a boot that has excellent grip and control and which will support you over a wide variety of terrain, as tried and tested. The Pilgrim GTX FG is exceptionally close to its retail brethren in the Pilgrim range at this point and you’d be hard pushed to tell the difference.

Moving up the boot, we now spot one big change – the previous AKU Pilgrim GTX MK 2 had the Air8000 system for the upper textiles. This doesn’t. Instead the Pilgrim GTX FG has 100% HT Polyamide 6.6 Cordura which gives high abrasion resistance and is breathable and water resistant.

You would now expect there to be a sacrifice in terms of how the boot breathes. I mean, we’re using a lower spec bit of material here so, it’s obvious… isn’t it? Well in fact, it doesn’t really make that much of a difference at all. Again, AKU have decades of experience and know how to put a boot together. Your feet come out of the Pilgrim GTX FG more or less in the same state as with the AKU Pilgrim GTX Mk 2, relatively dry (depending on your exertion level) and comfortable. The boot still seems to breathe just as well. Even as a boot snob, I can’t tell the difference. 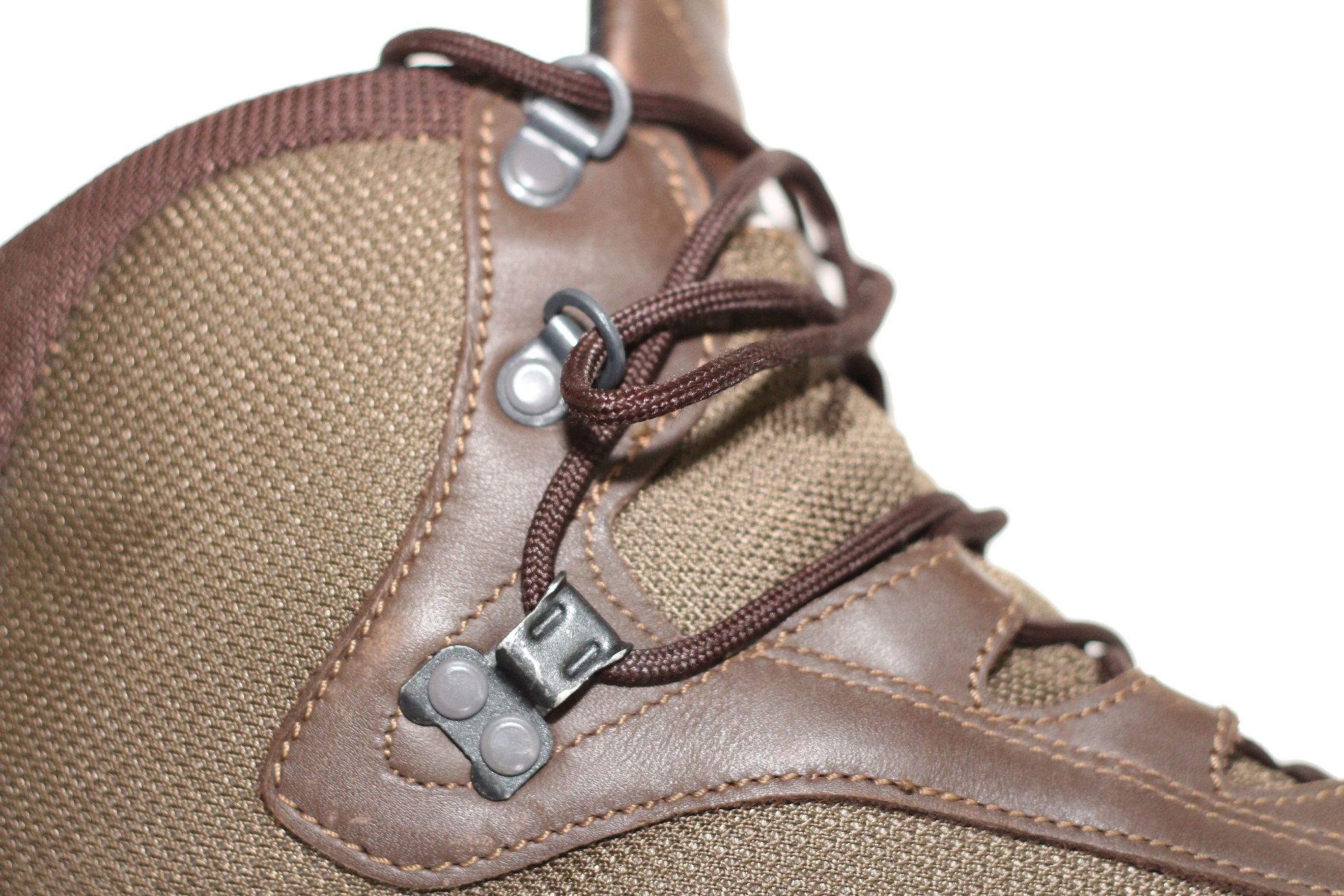 There is Full Grain Bovine leather up the front of the boot for the lacing system – full grain being the best grain and again another sign of money well spent. It will last and provide that protection and support needed for one of the most stressed parts of the boot – the laces. Neatly onto that subject, the laces are high abrasion resistance Polyester and Nylon with a good level of water resistance and wicking which means they dry quickly; the actual D-Loops are iron and steel, riveted into place securely enough that you won’t have to worry about them breaking loose or spinning round.

The collar of the Pilgrim GTX FG is another area where there is a difference compared to the AKU Pilgrim GTX Mk 2 – the collar is slightly thinner than the retail, giving slightly less padding and comfort though again, the difference is absolutely negligible. Once the lacing system is done up, the Pilgrim GTX FG are still incredibly comfortable, and the inbuilt Achilles protection means there’s enough flex down the back of the boot to mitigate the risk of injury.

Looking inside the Pilgrim GTX FG, we can see that GORE-TEX lining, designed to give protection against the ingress of water through the boot whilst still letting the foot breathe. It does exactly that. As with the AKU Pilgrim GTX Mk 2, the GORE TEX is fixed in place with glue, but rather than a complete layer of glue, it’s microscopic dots of glue that create a honeycomb layer, which still gives the strength of hold but increases the boots ability to breathe. 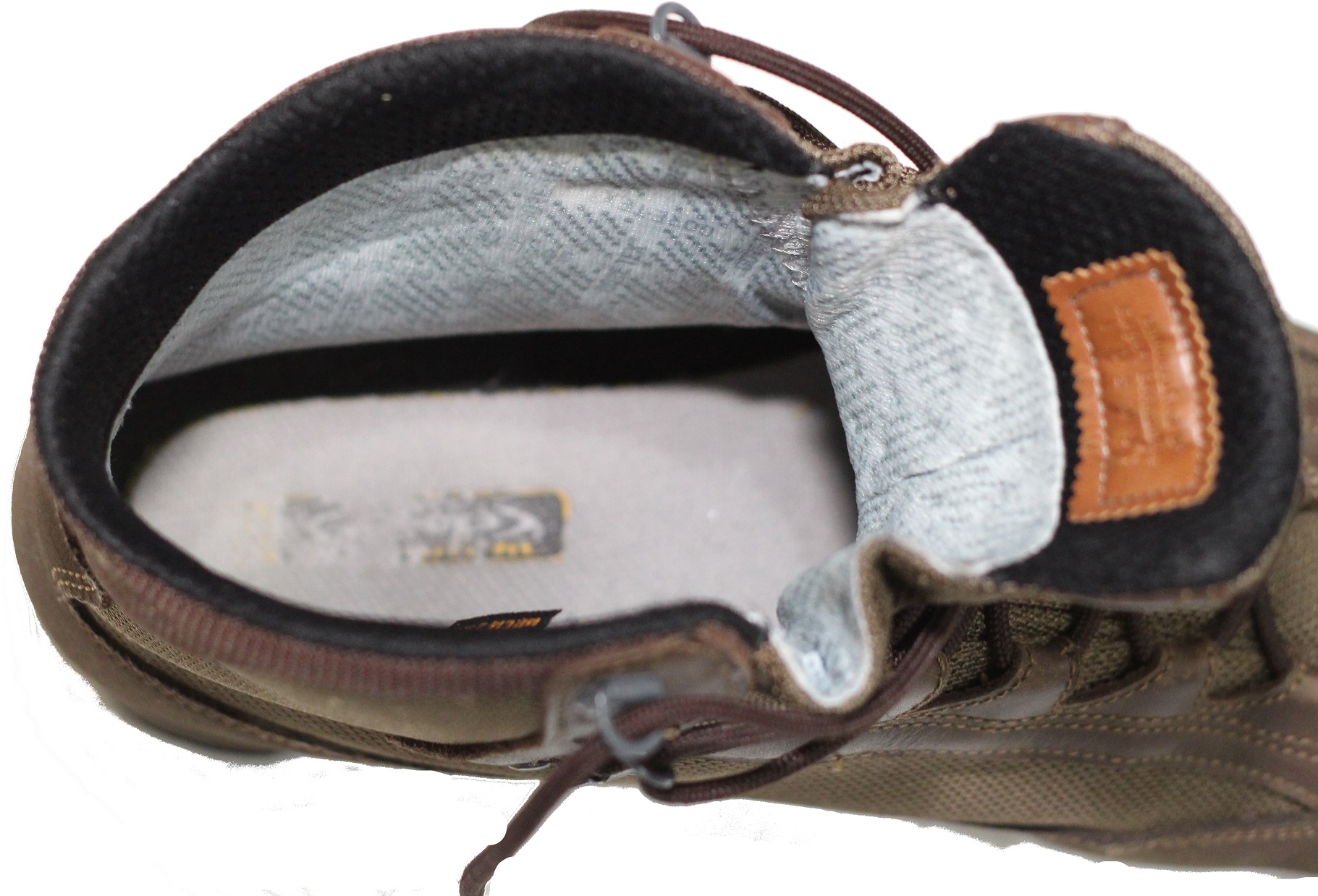 The GORE TEX protection is complete, including tongue and up to the collar, so unless the water goes over the top of the Pilgrim GTX FG, it’s not getting in. This again has been proven in tests over a two month wear period, and it’s absolutely spot on.

Down the bottom of the inside, we have the insole itself which is a curved and ergonomic style, nothing too fancy but better than many of the old issue insoles you’d get (Green feet graters anyone?). It doesn’t hold a smell and so the hygiene of the boot is kept to quite a high level, though again you can always swap this out with an Ortholite or whatever your fancy is.

Underneath the insole of the Pilgrim GTX FG is the 3D Midsole which is designed like a cradle to support the foot rather than again, just a flat surface for it to rest awkwardly on. The boot really does feel very comfortable and does an excellent job of cushioning and supporting the foot throughout, be it walking over rough terrain or running like the legend you are, it keeps the impact to a manageable level.

The big plus, is that it’s a Pilgrim, so it looks good and could easily double up as your daily footwear if you’re so inclined – I wear Pilgrim every single day and the Pilgrim GTX FG is a robust, resilient boot which fills you with confidence over any terrain, and makes you want to kick someone in the head (in combat of course, not just walking down the street because that wouldn’t be nice) just to see how it feels. 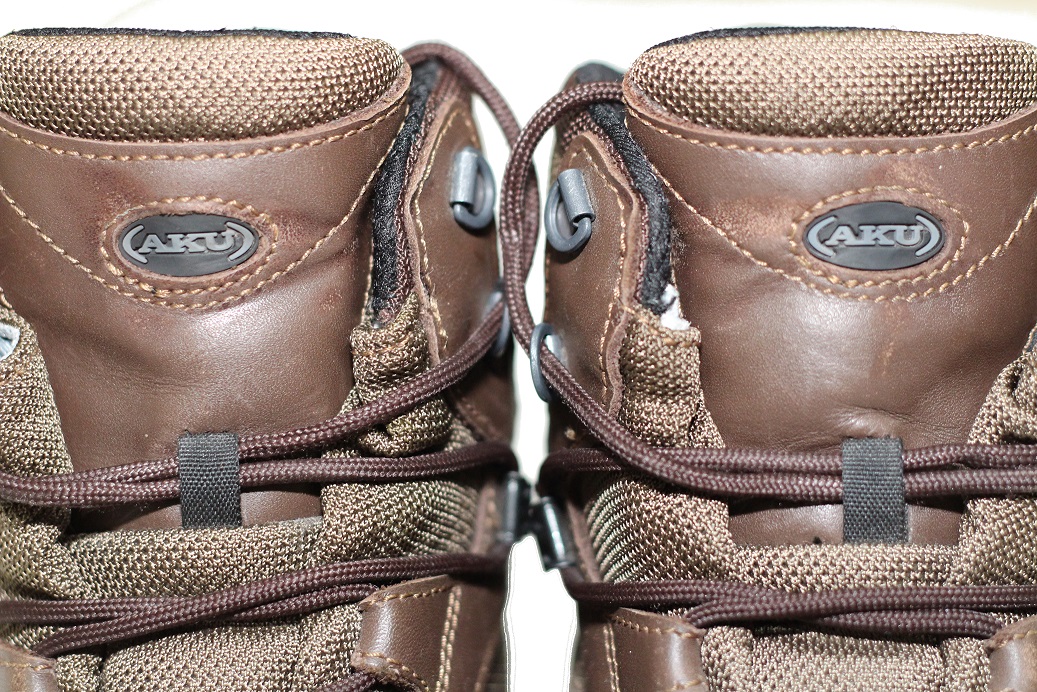 The British Army has finally taken one huge, hulking leap forward. Forget about your UOR armour and weaponry. This is probably the single most important development for the individual soldier since they added strawberry porridge to the ration packs. 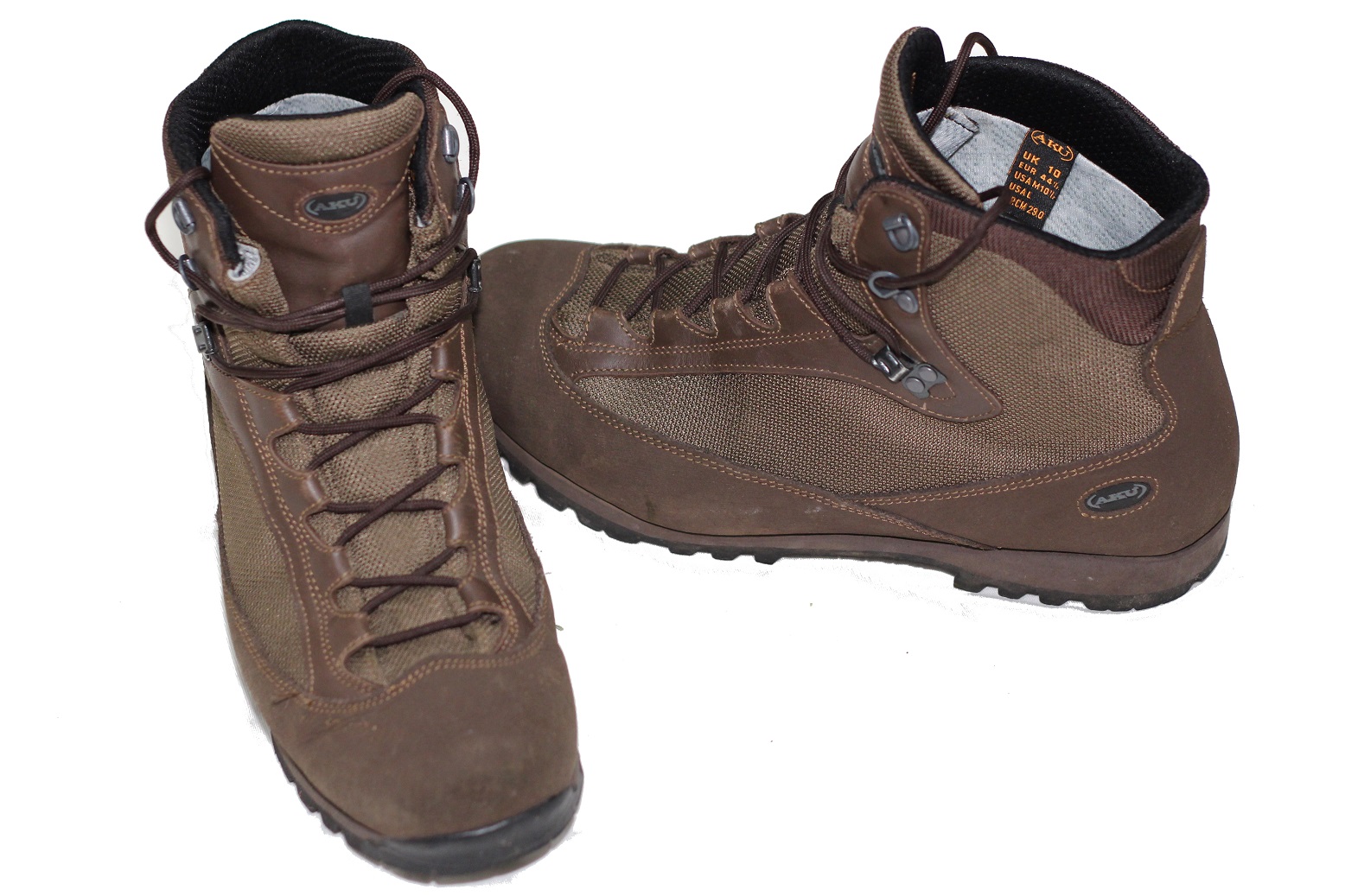 With these boots on, as you storm over the enemy position and skewer him through the face with your bayonet, you can stand easy in the knowledge that the last thing he’ll see is that AKU logo swinging towards his face to cave his skull in, and as he kneels on the ground with that last breath escaping from him, he’ll gaze up at you with those bloodshot eyes, not out of fear, but out of respect, and say with that last breath, “Nice ******* boots.”

If on the other hand, you want to win a pair, the head over to the Discussion Thread here to enter!