It’s fair to say that as far as boots designed for military application go, there’s not a lot of imagination in the majority of the styles available. Some might have some fancy leather design, or mesh in random places, but generally, they all look alike.

With the British Army switching over to MTP from CS95, the requirement for new boots means there’s a chance to breathe life back into a fairly unexciting part of the kit roster. One company in particular has decided to do something new in terms of footwear, bringing a new style and look in the form of Trekitt’s collaboration with AKU to create the Pilgrim boot. 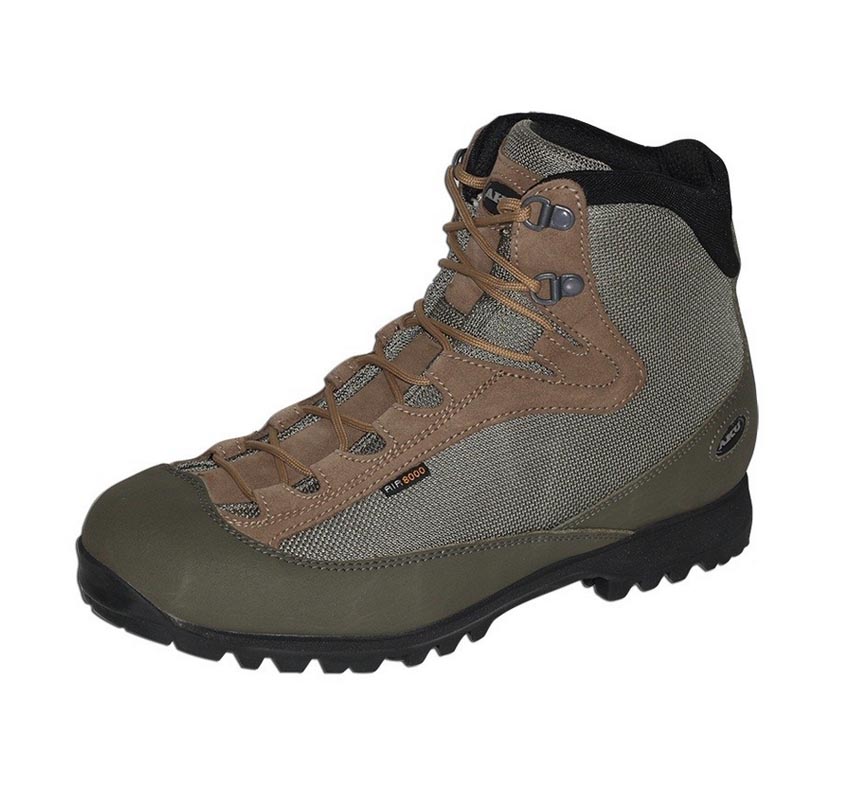 Based on the original AKU Navy Seal boot, Trekitt have joined forces with AKU, the Italian boot manufacturers to help develop a new style of boot designed for regular military use, aimed at the British army.

The first thing that strikes about the Pilgrim is the look. It’s got a fantastic design style about it with a fairly vibrant use of colours, which is an odd word to attribute to grey, green, black and beige, but it looks superb regardless.

The second thing to strike is that although it’s designed with the military in mind, it’s only a 6” boot, meaning the boot doesn’t go as high up the leg as a standard issue boot. This has potential to cause some conformity issues for general Barrack Duty, but certainly when it comes to an Operational Deployment, it’s a fairly irrelevant fact. Trekitt have stated that their future intentions are to produce an 8” version which would address that fact.

The AKU Pilgrim Desert is stacked full of features and high-end performance material to ensure the boot gives the best support, protection and grip available whilst still maintaining a flexible and robust edge.

The AKU Pilgrim Desert has been manufactured using a fabric technology called ‘Air 8000’ which is lauded for its increased breathability and moisture wicking capabilities.

Normally, the boot lining is glued to the boot outer by using glue. The common practice is to simply coat the inner completely in glue which gives a solid and strong connection. The problem with that, is that the glue seriously reduces the boots ability to breathe, as you’ve effectively covered the material pores.

Air 8000 works by using a net glue, which, as the name suggests, is basically a net, with lots of gaps in it that aren’t big enough to affect the holding power of the glue, but do allow the boot to breathe better. Imagine Wundaweb that you’d use on a trouser hem for example. Almost exactly the same idea.

The actual boot outer itself is tough woven nylon with several raised areas giving more protection and durability to the overall body of the boot.

The laces are secured by being looped through the strong outer material with the top two tiers being D-rings and the tongue has a mixture and allow for a comfortable fit when tightened without digging in to the sensitive upper areas of the foot.

The AKU Pilgrim Desert also weighs in at 1326g for a pair, which whilst it sounds a lot, is barely noticeable due to the good fit.

The overall impression and results of use in a variety of situations and terrain, is that the AKU Pilgrim Desert is a boot that’s going to last!

In terms of the midsole, the AKU Pilgrim Desert uses a system called an Internal Midsole System which, when you put all the technical jargon aside, essentially means the midsole is slightly curved, meaning your foot sits naturally in it, cradled in such a way as to minimise stress, fatigue and slippage. Most boots have flat midsoles which help to keep the boot rigid at the cost of comfort, but the AKU Pilgrim Desert manages to combine comfort with rigidity in a fairly successful fashion, and it means prolonged wearing is still a comfortable experience several hours in. 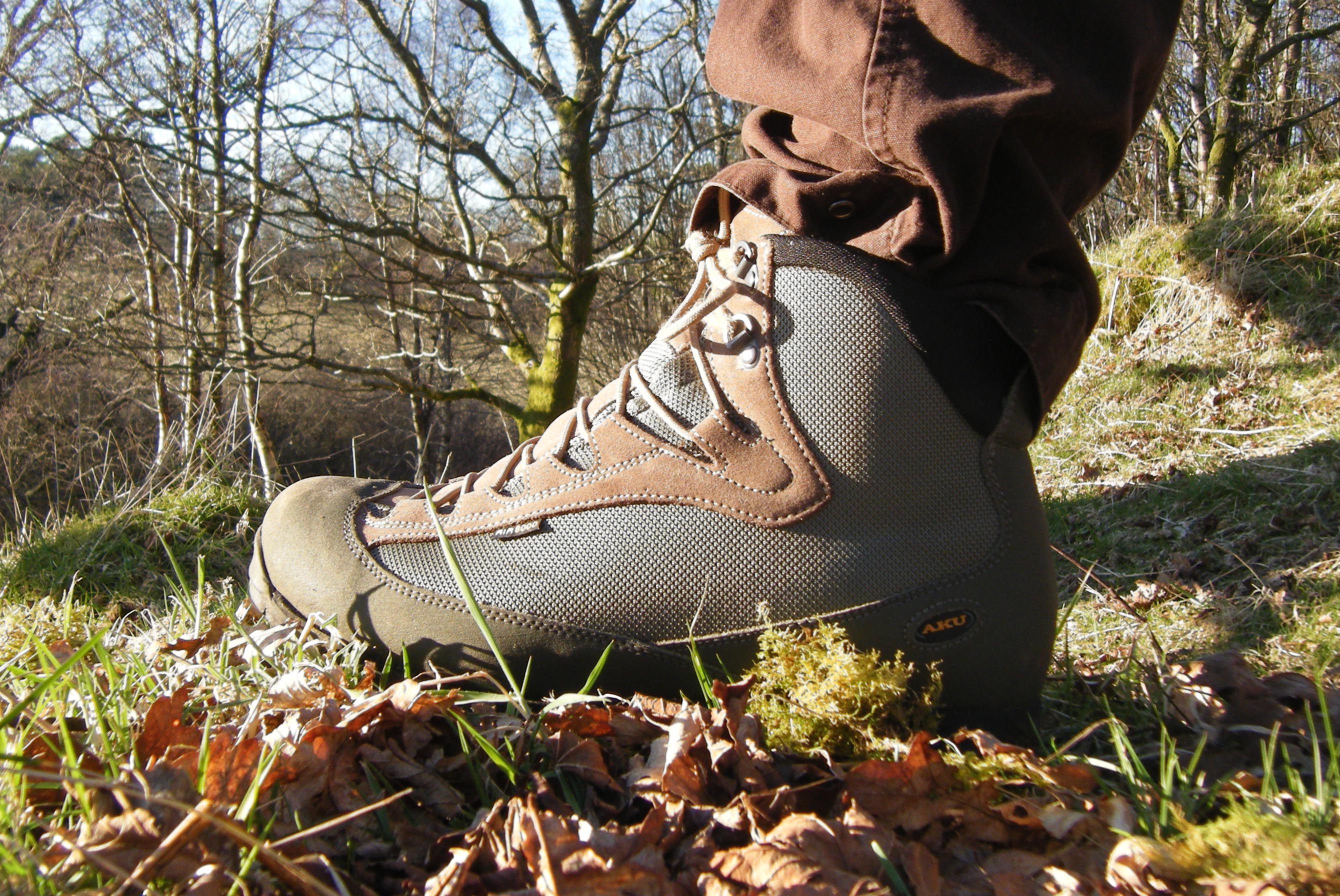 Above the IMS is a 3mm layer of EVA to absorb shock and cut down on the pressure placed on the joints when carrying heavy loads, again making for a more comfortable experience overall, and below the IMS is another layer of EVA, with 5mm under the forefoot and 17mm under the heel. This ensures that any impact shock is absorbed and dispersed properly, but that more importantly, focus is given to the area where the most shock is sustained.

This makes running with the AKU Pilgrim Desert a much better experience than other boots, with an easy, flowing spring action feel to the boot as you roll your foot into the landing and the energy carries you through without the jarring sensation of impact.

To round off the AKU Pilgrim Desert, the sole itself is Vibram branded, with what Trekitt describe as ‘positive heel brake’ which essentially means the grip on the heel points towards the toe to allow increased grip going downhill or when stopping suddenly. Vibram are a well known brand and it’s good to see that whilst own brand soles are often very good, that expense hasn’t been spared on the AKU Pilgrim Desert.

The AKU Pilgrim Desert sets the bar high in terms of expectations. When you look at the boot, you think; “This looks good. This looks like a quality product.” And so you go in to putting it on your feet expecting the same quality in terms of comfort and support.

It’s no surprise then to find out that those expectations are reached and surpassed, with the AKU Pilgrim Desert being phenomenally comfortable to wear and giving excellent support over undulating terrain, wet ground and snowy hills.

Although it’s advertised as a military boot, which it’s more than suitable for, it’s also a truly fantastic outdoor boot which makes sense when you look at the heritage of the manufacturer.

The AKU Pilgrim Desert is a joy to wear. Running is a flowing experience with little jarring thanks to the IMS and Vibram sole, and the boot never becomes a burden. Even with heavy wool socks on, the feet don’t sweat anywhere near as much as they would in other brands, thanks to the great airflow.

The AKU Pilgrim Desert weighs in at a tasty £149 which puts it in the middle bracket in terms of boot pricing, but in terms of bang for your buck, it’s far ahead of many of its competitor, especially when you consider that this boot will easily double as your everyday outdoor and hiking boot.
Don’t let the word; ‘desert’ put you off, these have been worn in snow and rainy conditions and have been flawless throughout.

Combined with a great look and a great wear, the AKU Pilgrim Desert really does tick all the boxes. Once it’s been pushed to an 8” model, I can’t think why you’d look elsewhere!