On my recent adventures to the AKU factory in Italy a pair of these trainers were thrust into my hands with the bold claim that I simply had to see how comfy they are.

Now I wasn’t massively drawn to them looks wise to be honest. In amongst all the other stuff in the AKU range I wouldn’t have picked these out of the crowd. If im honest I don’t really wear trainers except in the gym. I’ve got a pair of the issue Magnum trainers for outdoor phyz and some ancient Fila running shoes for indoor phyz. Other than that it’s smart shoes or boots for nearly every occasion.

Hence why these didn’t really appeal to me at first. I’m just not a trainer guy.

Now these are marketed as a shoe for “easy hiking, travel and leisure time in contact with nature.” Basically they’re trainers but with a rugged sole for grip on the rough stuff and Gore Tex to make them waterproof and breathable. They’re the sort of thing you see people wearing as they wander around outdoorsy shops in the Lake District, dressed in their Rab gilets and Rohan trousers.

Like a sticker that says my other car is a Porsche, these say my other shoes have crampons on.

So fairly unconvinced and after a long day testing the new AKU Pilgrim boots, I begrudgingly tried a pair on, more out of politeness than curiosity. Well the first thing I noticed was that they were too small. I’m a 10 for the Pilgrim boots but these were definitely a little tight on the toes. I went a half size up and they were fine. Interestingly I have this problem with most trainers and sporty shoes.

I’ve gotta say it didn’t take long for things to click. Bloody hell these things were comfy. Like a pair of old slippers. I don’t use the term walking on air lightly but it applies here. I took a few strides around the shop and immediately knew I had to have a pair. I didn’t care about the mountain climber Walt looks, or the fact that the best colour they come in is Silver Shadow grey (Black and Brown also available). On comfort alone I was completely sold.

Are they worth it?

Well yes, I think they probably are. Let me explain. A huge amount of research and development has gone into these to make them as comfy as possible, as well as rugged and long lasting, while still being incredibly comfortable and lightweight. They’re Gore Tex of course (hence the GTX in the name) which means they’ve been through all the usual Gore Tex quality control for water tightness, breathability, longevity and drying time. They are also the culmination of years of AKU’s experience making very very high quality footwear.

On to the comfort. This is achieved by using AKU’s special footbed which is designed to follow the natural contours of your foot and aid the roll of your foot as you walk. When you walk you start on the outside edge of your heel and roll your foot diagonally until it reaches the inside of the ball. The shape of the footbed rolls with your foot so it almost feels like you’re always walking slightly downhill. The sole is super flexible (despite being rugged and grippy) which allows a more natural stride. Coupled with this, they weigh hardly anything at just 320g per shoe. There is also a wider toe area than found on most trainers and of course the breathability provided by the Gore Tex.

These have now become my all round phyz shoe. Just at home running cross country as they are in the gym or doing some light hill walking (I’d still always opt for something with ankle support for proper hill climbing). The missus agrees, she loves her’s and is doing the Great North Run in them in September. We live in the Lake District and are quite “outdoorsy” so they’re kind of perfect for the lifestyles we lead, walking the dogs, mountain biking etc. etc.

We also fit in with all the other twattish couples in matching gear when we go shopping in Keswick now.


Other points of note: also available in a cheaper non Gore Tex version at £129. They come with two sets of laces so you have a choice of the toggle lacing system or standard lacing. Ladies version have a lighter grey sole and pink lace loops as opposed to red on the men’s. 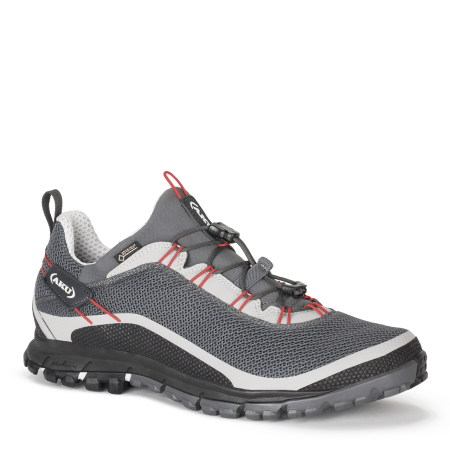