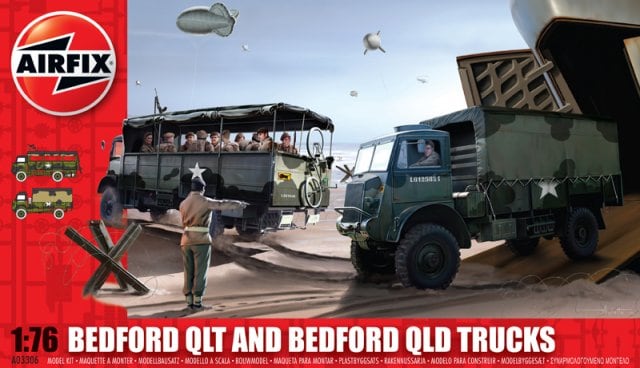 Airfix, the name that conjures the image of the small boy assembling a plane, while his pipe-smoking Dad looks proudly on. Most of us remember our first Airfix kit, some of us fondly, most of us, with horror at the mess we made. The company has gone through many rebirths and restructures, and is now enjoying a new life from it's present factory at Westwood, between Margate and Broadstairs in Kent.

I have stated on a number of occasions that I am interested in British & Commonwealth trucks of WW2. I am amassing quite a collection of 1/72, 1/76 and 1/35 scale trucks of various manufacture and type. The Airfix pair were bought to add to that collection.

Inside the box, there is the inevitable sealed cellophane bag. This contains three main sprues featuring; QLD body and cab, QLT body and bike, and QLT cab. There is also a small clear sprue, which carries the two part windscreen and door windows. I would normally bin these and cut my own from clear flexi-card! There is a nice selection of decals for the two models; including RE, RASC, REME, 4 Guards Armoured Div, 11 Armoured Div, 51st Highland Div, 3rd Infantry Div, vehicle numbers and bridging numbers, as well as allied stars.

The kit parts themselves are quite detailed without too much flash. There is however, a lot of mould lines and release pin marks. Most of the latter appear on the inside or bottom of parts, but can still be a nuisance. There doesn't appear to be any obvious sink holes or warping to the parts and they all fit together well.

I feel the addition of a number of figures would have benefited these two models, especially drivers and troops for the QLT.

Both of these kits make up into nice little models, either stand alone or in a diorama. Some may mock the choice of kit supplier, but they do make well-detailed kits!
Considering the fact that over 52,000 Bedford trucks were built and used by all Commonwealth and allied armies, it is a shame that decals are only provided for British Trucks. I would like to see some from India, South Africa and New Zealand.

In conclusion, these are very good kits, appealing to all grades of modeller.