Overview Discussion
Leave a rating
We all hate packing bags. It’s a nightmare. It doesn’t matter what bag you’ve got, you always get that feeling halfway through the rigmarole of squeezing things in that actually, when they were designing this bag, they didn’t actually think to try and put stuff in it to see if it worked. 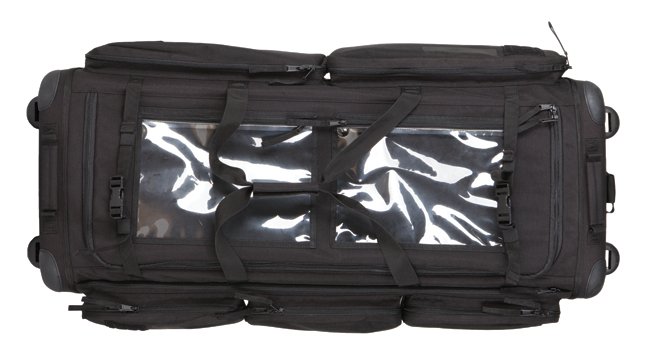 Of course, that’s if you can manage with one bag, or if you need two, maybe even three bags to carry everything. You sometimes sit there and wonder; “Is there an easier solution to this?
Short of hiring a Sherpa to carry everything for you on his back, it turns out that there is, although by god, it’s a pricey solution.

The 5.11 Tactical CAMS 2.0 (CAMS standing for ‘Carries All My Stuff’) is the latest improved version of the original CAMS bag. Designed to carry absolutely everything, it’s a beast of a storage option with everything you need in terms of capacity and robustness at a height of over 3ft tall when vertical.

Starting from the outside and working in, the bag is wheeled at one end with a reinforced axle and base to provide more protection and support. Along one side are three medium zip pouches and on the other, two larger pouches. These are ideal for all the general knick-knacks you don’t want rattling around loose inside the main compartment as well as any documents or suchlike.

There’s also a side pocket the length of the bag behind the three medium pouches. There’s so many storage options that I didn’t even notice this bit at first!

The lid of the bag is a zip seal, with two clear A4 pockets for you to slip identifying documents or shipping documents inside, keeping them visible and protected. Ideal for when you’re putting it through civilian airlines which are notorious for not giving a crap where your bag goes. (Miami airport anyone?).

Inside the main 40 inch compartment, it’s a bit of a wonder as well, with molle straps running the length of both sides allowing you to strap on any other pouches you might need inside for specific bits of kit, or even just to keep them accessible.

The compartment is broken up with three adjustable panels that Velcro into place. You can move them to wherever you want to allow you to accommodate and secure whatever items you have in there, or remove them completely if you’ve got something big that needs the room. The panels mean that when the bag is upright, they stop kit spilling all over the compartment. 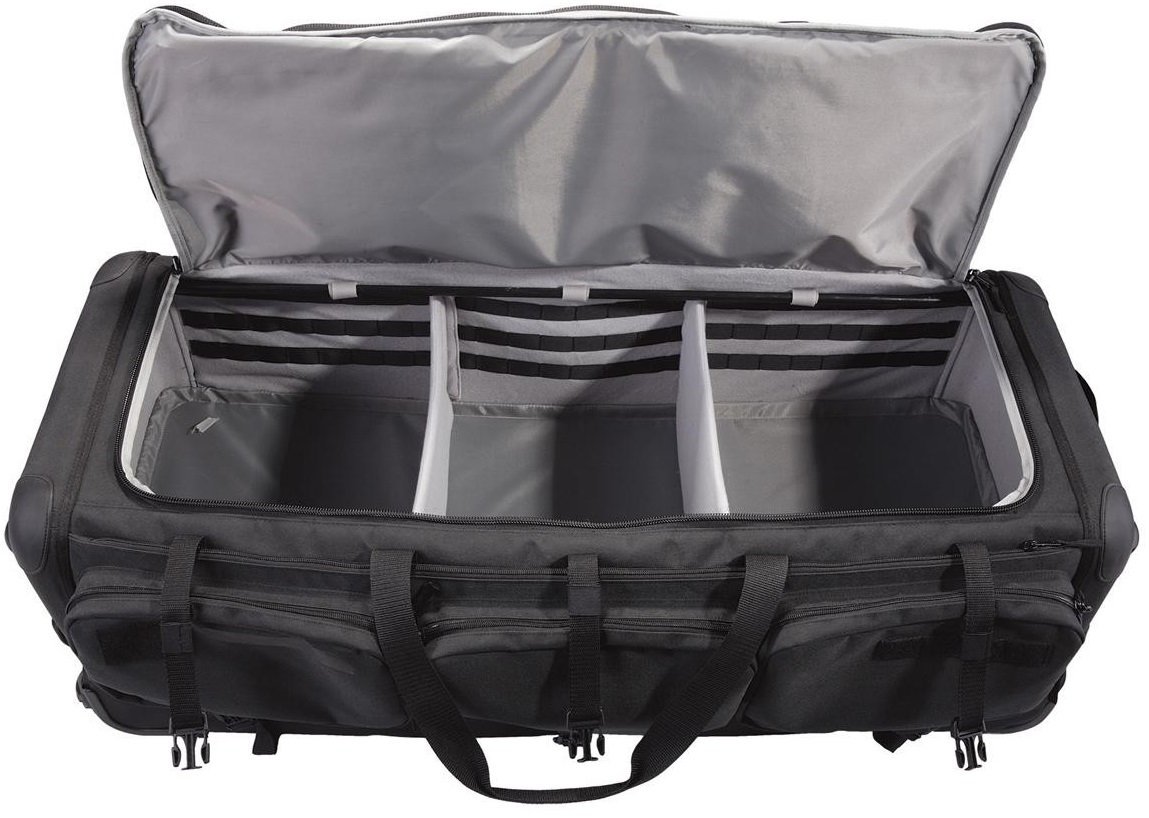 The main compartment can also be stiffened by the use of two carbon poles that fit along the insides. This gives the CAMS 2.0 a solid shape, or you can remove them if you require it to be more flexible. I kept them in to start with, but soon ditched them and it hasn't really created any issues at all.

As if all that wasn’t enough, there’s another zip that runs the length of the bag a few inches above the base, and when you open it, you can lift up half the bag to reveal a flat-pack compartment underneath it, the width and length of the entire bag. 5.11 advertise it as being able to fit a 36 inch rifle case although as you generally aren’t going to be putting a weapon in there for security reasons, it’s an ideal space in which to fit all your clothing with click straps you can pull tight over the top to keep everything in place.

The wheel base is designed, as you’d expect, for rugged use, and you don’t have to worry about it whether you’re bouncing it up or down stairs, or dragging it over dirt, gravel or rocky ground.

The only downside to the CAMS 2.0 is that because it holds so much, it will end up weighing a hell of a lot and become a bit of an effort to pull it around.

You might look cool with one of these bags, but it’s hard to maintain that pretense when the sweat is dripping down your face and the arm you’re pulling the CAMS 2.0 along with feels like it’s about to rip off from your shoulder! You can switch to a double hand pull, walking in front of the bag but you’ll need to find the step required to stop it banging into your hips. It really does lack some sort of drag strap that could extend out from the bag a few more inches. The one big problem I found towing this sod, is that I kept catching my heel on the back of it. Oh, did I mention it weighs a ton full? Yeah, I'm not exaggerating.

Hell though, that’s a small price to pay for what you can fit in it. With straps over the top of the bag allowing you to strap gear to the lid if you can’t fit it inside, it really can take everything you need.

There’s also a tow strap which allows you to clip on other 5.11 Tactical rolling duffels, so you can form a ‘train’ with it, towing a smaller rolling duffel behind.

It’s truly an epic, monster of a bag, but it comes at a price and a degree of practicality.

From a military point of view, it’ll easily take helmet, body armour, even a compressed bergen if that’s your style, and with the bottom compartment taking all your clothing, you could easily compress your travel requirements into this single bag.
I've also used this for police kit once I moved from the mob to the job, and as far as police kit goes, again – body armour, hats, belt kit, boots, it’ll all fit with plenty of room to spare.

Yes it’s expensive, but it’s built like a tank, looks like a tank, and is also a feasible option to live out of if you’re only transiting and don’t have time to unpack (and by that I mean, actually live inside it).

The bag itself when empty weighs in at roughly 18lbs, so with British Airways as an example, the allowance there is for 51lbs, so you’ve still got plenty of scope, but naturally, if you fill it, you’ll soon go over that free allowance. If you need to though, then you might as well, otherwise it’ll work out more expensive paying for two or even three bags. I've found that trying to take it on a skiing trip is a no-go, the weight of the bag pretty much halves my available weight, so apart from work related flights where the baggage is free, I've yet to take it on an aircraft as I'd have to pay extra.

The bag is also a bit of a talking point when people first clap eyes on it. It’s been referred to several times as a ‘coffin’ and tests have proven that you can fit a petite and willing young lady inside it should that be your thing (and of course, should that be her thing).

Overall, it’s the be all and end all of kit transportation. There are cheaper bags out there, but no, you wont find them as well constructed, as spacious or as functional as the CAMS 2.0.

If you’ve ever found yourself taking more than one kit bag to go on a course / training or just on a trip somewhere, the CAMS 2.0 is your answer.

UPDATE: Four years on from the original review above, this bag is still doing the business and has yet to show any sign of stress or failure. It's worth pointing out that the CAMS has been absolutely beasted and mistreated, but everything's held together and I spent three months working out of it as I couldn't get a locker assigned to me. A simple combi-padlock on the zip and job's a good'un. Proof in the pudding that this bag is the best.
View attachment 268827