Before Covid-19 struck, one of the growth areas of up-market tourism was battlefield tours led by retired soldiers and academics, often distinguished ones. We must hope that these tours will be revived. When that happens, 1066 will prove a useful handbook for organised groups or the independent traveller. The book is one of a series published by Pen and Sword Military. 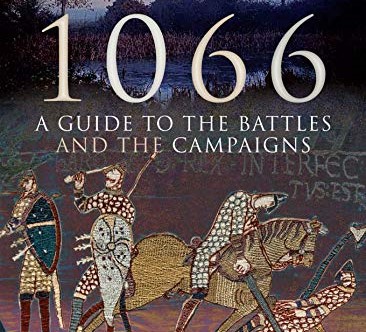 1066 is a hybrid: a cross between a history book and a guidebook to the sites. The guidebook element and its accompanying maps cover large areas of England, Scotland, France – especially Normandy - Denmark and Norway. Most of the time this combination works, but sometimes the guidebook pages disrupt the flow of the history book; moreover the author of the guidebook sections occasionally gets carried away and descants upon interesting and beautiful buildings at the different locations which were constructed long after 1066 and have nothing whatever to do with the narrative.

There were two invasions of England in 1066; both are covered in great detail, including the prior diplomacy and the military action. The first, by King Harald Hardrada of Norway understudied by Harold of England's traitorous brother, Tostig, was defeated. Harald of Norway and Tostig were both killed in the Battle of Stamford Bridge. But hardly had Harold of England retired to York to rest his army than news arrived of the Norman invasion led by Duke William in person. King Harold had to get his army to the South Coast in record time to confront a new and even more dangerous enemy. He almost won at Hastings, too, and without the Norwegian invasion certainly would have. For that reason the unpleasant Tostig was a very important political and military factor. Unwittingly, he had greatly aided William of Normandy.

As it was, Harold was killed; most of his army were, too; and the road to London lay open. William of Normandy was crowned at Westminster on Christmas Day 1066 and began a reign of terror in order to subdue a country which hated him and had excellent reasons for doing so. In January 1066 England had been at peace under the rule of Edward the Confessor; even enjoying the rudiments of constitutional government in the form of a 'parliament' known as the Witangemot, whose members chose Harold Godwineson as Edward's successor. The English church went its own way, with married clergy, special usages inherited from the Celtic Church, and the cult of English saints of whom no-one else had heard. (Unsurprisingly, the Pope supported William's invasion, which promised to bring the Church into line with Rome's rule-book.) By the end of year civil liberties had been wiped out and England was ruled by a tyrant who cared little for his subjects' welfare; the deer in his forests were more important.

The evidence is still visible; the surviving Norman castles, which we find interesting and romantic, were put there to dominate a hostile countryside. The Anglo-Saxon elite had no need for such fortresses; they lived in large wooden houses. Twenty years after the Conquest, when the Domesday Book was compiled, virtually no land was held by Anglo-Saxon proprietors. The Anglo-Saxon nobility had been wiped out or dispossessed and replaced by Normans. The same went for the Church; the bishops and abbots were almost all Norman. Norman-French had become the language of administration, the law and heraldry. Although the English language won in the end, it was an English heavily influenced by French, as we can see from the Middle-English works of Chaucer and Langland.

One reason why the Norwegian invasion is less well-known that the Norman one is that it was not successful; the other is that it produced no equivalent of the Bayeux Tapestry. It is remarkable that that extraordinary piece of embroidery should still exist, and many of its pictures are surprisingly accurate. Heinrich Himmler wanted to acquire it for his collection.

1066 knocks a number of legends on the head. For example, Harold was not killed by an arrow to his eye; the 'arrow' is in fact poor 18th century repair-work to the Bayeux Tapestry. Harold is probably a foot soldier nearby, who is being cut down by a mounted knight. That agrees with contemporary accounts. Nor were the English inferior to the Normans as soldiers: Harold's regular soldiers, the Huscarls, were reckoned to be the best in Europe. The conscripts, the Fyrd, were another matter. William's army was only about one-third Norman; the other two thirds haled from Flanders, Brittany and even further afield. Many names that were to become famous in English, and wider British, history, came into Britain at that time, including Percy and Grosvenor (Norman), D'arcy (from Burgundy), Bruce and Ker (from Brittany).

Michael Livingstone is Professor of English Studies at the Military College of South Carolina. Kelly DeVries is Professor of History at Loyola University, Maryland and an Honorary Consultant to the Royal Armouries. Both have published numerous books on military history. One minor grouse: parts of the text are peppered with Americanisms, which can be both confusing and irritating to an English reader!