Stealth a. the means by which tax rises are implemented in the United Kingdom.

Stealth n. a technology that increases the through-life cost of equipment by about 270,000%

A generic term that describes a technology applied to an equipment to make it less observable. Stealth technology is typically targeted at radar, infrared and acoustic means of observation. NOTE: This statement usually brings out some smart-arssed cnut, who, in particularly nasal and nerdy voices, says “er, er, er, I think you'll find that DPM is actually a visual stealth technology” and then sniggers through his nose at his own cleverness. Fcuking twat.

This is the classic one that everyone, unless they were born on Neptune, has seen on the TV in the form of the F-117 'stealth fighter'. However it was the Germans who started the whole thing (of course) to make their Navy less detectable. This German stealth technology was made, not from pork, but from iron powder and was therefore stupidly heavy and suitable only for ships. It is still used today by Navies throughout the world and is now sold in paint form by BAE. Radar stealth is used all over the place including airport buildings, wind turbines, UAVs, tanks, helicopters and, of course, stealth fighters.

The Spams were the first people to seriously explore putting radar stealth on aircraft. For lots of tedious detail on this consult any one of a million other resources by typing 'Have Blue' into any search engine. From Have Blue they created the worlds most expensive piece of origami, the F-117, which proved to be every bit as expensive as the scientists claimed. From that they made a bigger, sleeker, even more stealthy, even more expensive bomb-truck, the B-2. This was even more expensive to maintain and had to be nursed 24 hours a day by naked air-techs rubbing lotions and oils into the silky crevices and bulbous protrusions and oh..oh....Oh...OH. Needless to say this was just stupid and the B-2s have retired to Guam to cook in the sunshine.

Then came the F-22 the pinnacle of today's radar stealth technology.

Stealth Fighters and Other Nations

The UK gave up it's stealth fighter aspirations after BAE told the MoD how much it would cost. No amount of fat, brown envelopes could convince anyone to go for it and the programme ended to an audible release of breath in Whitehall.

The Russians are still attempting to copy the F-22, which will certainly look like an F-22 but will be about as stealthy as the Trooping of the Colour.

The Iranians have laughably attempted a 'stealth fighter', which is just a crap fighter painted black.

This technology concerns hiding stuff from heat-sensing devices like IR cameras and IR seekers. This is far more complicated than Radar stealth because you want to match your IR emissions to the background; heat will stand out from the background so you want to appear cold, but not so cold that you end up standing out again. Control of your IR emissions is achieved using special coatings and if you operate kit with these coatings you will be told not to paint it, scratch it, clean it too vigorously, wank or shit on it because any of these things will render the coatings ineffective (and nothing gives you away faster than a flying turd).

IR stealth is clearly a very complicated matter involving maths. It also involves Greek letters and odd words like 'emissivity' so is best left to the men with beards/sandals/socks/white coats.

This is mostly about the world hiding from submarines and vice versa. This is easy; everyone wants to be as quiet as possible, which is achieved by using lots of rubber. 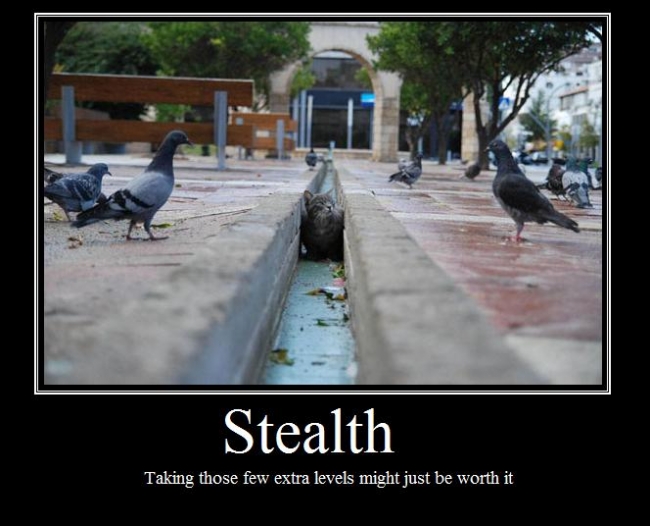